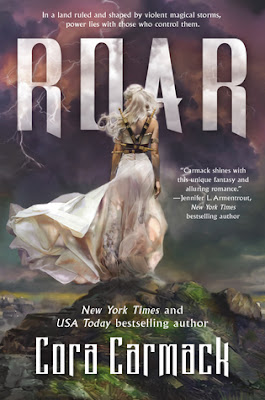 Roar is the absolutely breathtaking latest release by Cora Carmack and is guaranteed to excite fans of Maria V. Snyder, Kristin Cashore and Sarah J. Maas! Readers will find themselves immersed in a thrilling world of magic, storms and powerful individuals, mingling romance and danger with exhilaration and excitement!

The land of Caelira is ruled by powerful and magical storms, capable of shaping or toppling cities. Aurora is the heir to the Pavan throne and is a member of one of the oldest and most powerful Stormling families, but for all her ancestors’ abilities, Aurora’s own powers are non-existent. Despite being brave, intelligent and having been trained to be the perfect queen, Aurora is missing the magic she’ll need to keep her people safe, leaving her only one option; Aurora will need to marry someone capable of fighting the storms that threaten Pavan. But Aurora’s betrothed is a dark, seemingly cruel man who cannot be trusted, and with the wedding only around the corner, Aurora loathes being manipulated. So when a chance encounter with a storm hunter in a black market that trades in storm magic sees Aurora discover a second option to her seemingly hopeless situation, Aurora decides the best way to avoid her arranged marriage is to obtain magic of her own….even if she’ll need to leave Pavan to do it…..

Having finished Roar, I find myself breathless. And still so lost within this bewitching tale. Cora Carmack so thoroughly drew me into this vivid and powerful world of storms and storm magic that I’m finding it hard to believe Rora and Lockes first tale has come to an end. Roar was everything I love about fantasy and has me completely sucked into the characters’ lives and their stories.

Introducing her readers to a striking and expressive land ruled by dangerous kinds of storms and inhabited by individuals able to tame them known as Stormlings, Cora Carmack really manages to entrance her readers. Everything you can think to love about a well written and well depicted fantasy tale is there; forbidden romance, electric chemistry, excitement, adventure, daring battles, witty humour and banter….it’s all there! Roar is fantasy at its best and I guarantee you’ll find something to love.

Utilizing some very unique and intriguing storm magic, Roar also features a stellar heroine in Rora; Roar, Rora, Aurora….however you wish to think of her in your mind. I think of her as Rora myself. Personally, I felt she was a strong main character and liked the fire we find within her. There are some aspects of life she is inexperienced and innocent too, but I like that she wanted to fight to help her people as well as find a better option to her own personal situation. She took chances and risks and was willing to venture into the unknown. A well balanced main character, I can only imagine where Cora Carmack plans to take Rora in the future!

Roar unfolds in the third person and follows a number of different characters, although Rora’s voice is the most prominent, alongside Locke’s, who is the male lead and Rora’s love interest in the novel. Locke is capable and commanding; a strong male lead who compliments the story and the heroine perfectly. Locke’s voice was enjoyable to follow and I find him very swoon-worthy—a good trait in a fantasy tale. He’s protective and caring while also managing to be confidant and occasionally arrogant and cheeky on occasion.

The romance between Rora and Locke is one of my favourite kinds of romance; slow building but electric with plenty of sexual tension and chemistry. It’s evident both characters are attracted to each other, and I loved watching Cora Carmack develop their relationship as they fought the attraction and feelings that were growing between them. I loved watching them begin to care about each other and fall in love over time. I don’t know where Cora Carmack plans to take the series, but I’m one hundred perfect behind Rora and Locke as a couple!

Vivid and magical in so many ways, Roar was a sensational start to Cora Carmack’s Stormheart series and filled with tangible characters, a mysterious and forward moving storyline and the best kind of forbidden romance, Roar cements itself as one of my favourite reads of 2017 and leaves me absolutely dying for more!