Book Shelf: A Shot of Sin (The Vault #1) by Eden Summers 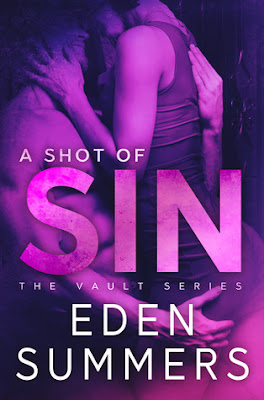 Throw back a shot of pure sin.

Leo Petrova has a dirty secret that’s about to get blown wide open. The exclusive VIP area hidden beneath his night club, Shot of Sin, is short staffed a bartender. The only available replacement is Shay—his temptation, his distraction—the sole woman he refuses to escort down the secret staircase. She has no clue about the private adult club that lies beneath her feet and he’d prefer to keep it that way. The Vault of Sin is the only place he can let his sexual proclivities run wild and he’s learned the hard way that Shay is too virtuous to be comfortable in the erotic environment.

Shay Porter is curious as to why her boss, the king of mixed messages, seems almost desperate to keep her from discovering what’s on the other side of the guarded door at the back of the building. But she’s never backed down from a challenge before. Sliding into Leo’s arms and this new world of carnal exploration is addictive yet frightening. She could lose her job, her self-respect, and her heart.

Exposing a vanilla woman to a sorbet lifestyle isn’t something Leo’s business partners approve of. Secrets are at stake. Friendships, too. And through it all, neither one of them can ignore the wicked taste of sin threatening to tear it all apart.

Warning: This sex club does not carry the government’s stamp of approval. Contains devilish debauchery, delightful deviance, and dancing on the edge of the darkest of sexual desires.

Please note: This book was previously released by Samhain Publishing. This new edition contains a few slight tweaks as well as a new setting for the series.

A Shot of Sin is the first novel in Eden Summer’s The Vault series and is a deliciously sinfully and sensual read that will appeal to someone wanting something a bit naughty but still delightfully fun.

Sassy and fiery bartender Shay Porter loves her job at a night club called Shot of Sin. The environment is enjoyable and she rocks the bar….if only she could stop thinking about her sexy but infuriating boss Leo. One heated encounter in a storeroom set Shay on fire but as Leo quickly backed off, Shay has found herself trying to decipher his mixed signals ever since. Leo Petrova has a secret; not only do he and his two best friends run a successful restaurant and nightclub, they also own a third business run underneath the bar that caters to only the most exclusive of guests and lets them explore their deepest sexual desires in a safe and protected environment. For years Leo has watched as women have walked away, unable to accept the adult club Vault of Sin that is his life and all the sexual experiences that come with it. None of the rejection he has faced in the past has concerned him as much as the idea of Shay’s scorn though. Shay is the one woman who tempts Leo in every way, yet the fear of scaring her away forever is what keeps him from giving her all he has. When Leo and his business partners find themselves short a bartender at Vault of Sim, asking Shay to fill in not only brings her into a lifestyle she’s not sure she’s prepared for, but opens the door to a world of carnal desires that could make or break her relationship with Leo. Will Shay succumb to pleasure or will her fear see her lose the only man she’s ever loved?

Having loved Eden Summer’s Reckless Beat series, I was looking forward to diving into A Shot of Sin. Admittedly I don’t have a lot of experience with novels featuring adult clubs or public sex, but I very much enjoyed what Summers has introduced me to. I thought she explored her carnal world sensually but respectfully to all those involved while also managing to write a novel that was witty, flirty and followed likable characters.

In all honesty there were times when Shay very much got on my nerves. I’m not the biggest fan of jealous, arrogant women and that’s how she came across on occasion. That being said, I did like her for the most part and appreciated her role within the story. Personally, I think I would have reacted in a very similar manner as Shay does in this novel where sexual discovery and exploration was concerned so I emphasised with this aspect of her.

Throughout the novel, the biggest draw for me was Leo, T.J. and Brute; three best friends/business partners who have unique sexual tastes. Personally I thought they were really charismatic and loved seeing them all interact. I know T.J. features in the next novel, but I can only hope Eden Summers gives Brute his own story and HEA as he really intrigues me as a character!

Introducing readers to a sensual world of pleasure and romance, A Shot of Sin was an enjoyable read by Eden Summers and leaves me keen to see what happens in the series next!