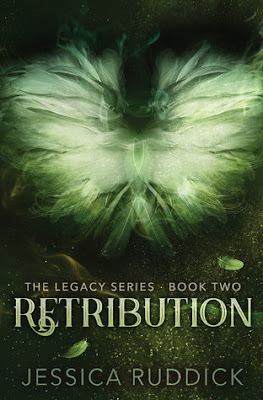 Ava Parks’ job as a seeker for the Grim Reaper is one she wouldn’t wish on anyone. It’s her responsibility to find souls with the potential to become angels. Last fall she learned the hard way that bucking the system has its own set of consequences, as her choices nearly killed the two people she cares about most—her mother and the boy she’s come to love, Cole.

Now, Ava’s mother is fading fast. Her former handler—and the root of her problems—seems set on revenge. And Ava must confess to Cole the price he has to pay for her saving his life—a decision he may never forgive her for.

Ava’s path to retribution is filled with twists, turns, and a whole heap of heartache. As problems mount and push her to the breaking point, she’s forced into the unthinkable, making her question everything she thought she knew about life, loyalty, and love.

Retribution is the second novel in Jessica Ruddick’s Legacy series and is another highly enjoyable and extremely easy to read tale that will draw readers in and guarantee they are left wanting more.

As a seeker for the Grim Reaper, Ava Parks' job is to find souls worthy of angelhood and turn them in. Yet essentially sentencing people to death has become more than she can bare, and refusing puts the lives of the people she loves most—her mother and her boyfriend Cole—in jeopardy. Her mother is fading fast and Xavier is still out there, haunting Ava’s every waking moment. Add to the fact she now has a new handler in the form of Xena and has to find a way to tell Cole about his new status as a seeker, Ava finds herself struggling more than ever. Ava will have to find the strength to protect those she loves, but with none of the choices good options, how will Ava choose who lives and who dies?

Having quickly devoured Retribution, I have to say I am thoroughly enjoying this series so far. Even with only two books now under my belt, I’m very much invested in Ava’s story. Jessica Ruddick has created something in the essence of Soul Screamers by Rachel Vincent; a tale filled with likable characters who have wonderful connections and chemistry together, a supernatural storyline that is both intriguing and full of potential, romance, action and plenty of ups and downs to entertain from beginning to end. Simply spot on, solid reading.

After the events of the first book Birthright, Ava and those closest to her are trying to come to terms with their new realities, while facing the overhanging threat of Xavier who is still the villain and whose motives are still unclear. Supporting Ava and Cole who readers are sure to already be in love with, Ruddick includes some new characters in the form of Xena and Shanice. Bill also takes on a larger role within the story and I think it’s simply adorable the new role he plays in Ava’s life. Personally I think the characters really complement each other and bring a lot to the story.

Retribution marks the beginning of a lot of changes to Ava’s life and sees her struggle with a lot of difficult and painful situations. Forced to eventually tell Cole the truth about when he was shot by Xavier, their relationship is put to the test. Ava remains a strong, personable character who has a likable voice and the perfect balance of inner strength, sass and teen vulnerability.

The loss of someone close to her will no doubt impact future books and I for one can’t wait to see what Jessica Ruddick does with the series next!