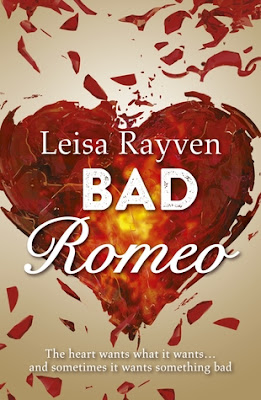 While performing the greatest love story of all time, they discovered one of their own . . .

Cassie Taylor was just another good girl acting student. Ethan Holt was the bad boy on campus. Then one fated casting choice for Romeo and Juliet changed it all. Like the characters they were playing onstage, Cassie and Ethan's epic romance seemed destined. Until it ended in tragedy when he shattered her heart.

Now they've made it to Broadway where they're reunited as romantic leads once again - and their passionate scenes force them to confront the heartbreaking lows and pulse-pounding highs of their intense college affair. For Ethan, losing Cassie was his biggest regret-and he's determined to redeem himself. But for Cassie, even though Ethan was her first and only great love, he hurt her too much to ever be trusted again. The trouble is, when it comes to love, sometimes it's the things that aren't good for us that are the most irresistible.

Bad Romeo is Leisa Rayven’s debut novel and is a wonderfully depicted love story; weaving together a tale of sensuality, romance and forgiveness.

Told through the eyes of Cassandra "Cassie" Taylor, Bad Romeo explores Cassie’s relationship with Ethan Holt. Cassie and Ethan were acting students, whose incredible chemistry spilt over into real life only to see Ethan break Cassie’s heart. Now six years after the beginning of their love affair, both are successful Broadway stars and have been brought together again as the romantic leads in a new play. Ethan is determined to prove to Cassie he’s a changed man, but can she ever trust him and admit to the feelings she still has when he left her a shattered mess the first time around?

Considering how easily I found myself swept up in this story and falling in love with Cassie and Ethan, I’m ashamed to say I’ve had Bad Romeo sitting at the back of one of my bookshelves in ARC form for such a long time. And yet I hadn’t read it before now……Seriously. What. Was. I. Thinking? I honestly have no clue.

I found Bad Romeo to be a well written, paced and depicted story. Leisa Rayven weaves together past and present wonderfully—something not all authors manage to do successfully. Bad Romeo details a very emotional love story featuring two characters who are genuinely very likable, but who have a very complicated, messy and difficult past.

Something that made this story so powerful in my eyes was the chance to compare the characters to who they were against who they are. They were both a lot younger when they first met, inexperienced in a lot of ways, especially Cassie….whereas at the present point in time they are both talented actors in their own rights who have been successful in their chosen field.

As the heroine and person whose POV we follow in Bad Romeo, Cassie is very guarded, jaded and angry when we first meet her. She comes across as hard and almost a bitch where Ethan is concerned, but it’s through experiencing her past with him that we really see how she came to be that way. Personally I thought it was really interesting seeing Cassie and Ethan first develop as a couple. Cassie is inexperienced when she first meets Ethan, but she’s incredibly attracted to him and it’s with his help she first explores her sexuality. Honestly, Cassie’s internal monologue and the dialogue is funny—she really was the horniest, and most sexually frustrated virgin I have ever read about!

Rayven writes some really sharp dialogue within this novel and gives Cassie and Ethan a fantastic chemistry. Considering how things ended between them, if they hadn’t been so powerful and electric as a couple, seeing them consider giving things another go wouldn’t be as satisfying. And I would probably wanna shake Cassie for giving he guy who broke her heart another chance……but I really loved Ethan. So I kinda understood why she did loved him too!

Sensual, funny and wildly romantic, Bad Romeo is a really enjoyable read that oozes sexual tension and sexual attraction. I can’t wait to read the rest of the series!

Source: Sent for review by Pan Macmillan Australia
Format: Paperback ARC
Buy it: Bookworld | The Nile | The Book Depository | Amazon
My Recommendation: A fantastic NA read and something fans of romance will love!
Cover: I actually really dig it!
Will I read sequel/continue with series: Yes. Can't wait to read more!