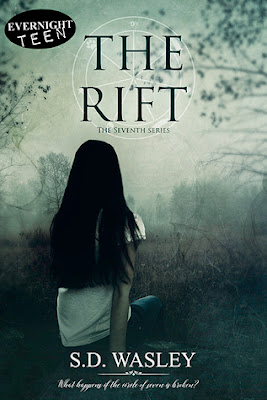 “I longed for normality. Even our own, off-the-wall brand of normality.”

She’s finally got things together. Mimi’s dating a hot guy and has a place in the school’s Gifted Program with her awesome friends. Yes, she still attracts the dead. But there’s only one ghost these days, and he doesn’t seem to have an awful lot to say.

Just when Mimi’s life is looking pretty good for the first time in years, the unthinkable happens ... one of the seven gifted teens is torn from their close-knit group. The unity of their circle shattered, things begin to go terribly wrong. It’s ruining their focus—and with the threat of the Astarion cult growing stronger each day, the gifted seven need all the focus they can muster.

Review:
The Rift is a wonderful follow up to S.D. Wasley’s debut novel, The Seventh and is an enjoyable tale that continues on with the storyline from its predecessor yet also sees Wasley add new layers to her series.

After the harrowing events of The Seventh, Mimi thinks she’s finally got her life together. Having found her place at Etherall Valley Prep, Mimi is enjoying learning to control her gift of seeing ghosts, has a wonderful relationship with her boyfriend Drew and has embraced her role in the Gifted Program. Everything is going splendid; that is until the gifted teens see one of their own torn from their group, resulting in unexpected havoc affecting their gifts. With the rogue Astarions an ever present threat, Mimi and her friends must rally together and figure out how to save one of their own, or risk the consequences that are too horrible to even consider…..

Having read and enjoyed The Seventh, The Rift was a decent follow up in my eyes. S.D. Wasley is back with solid, descriptive writing and more mysteries to uncover. This series is shaping up nicely and I enjoy the way all the gifted teens support and complement each other. Wasley explores different conflicts and makes you question just who is the good guy and the bad guy at times.

Mimi is still a solid protagonist, but I’d be lying if I didn’t say I had my issues with her in this novel. I’m going to chalk it all up to being a teenager and needing to make mistakes and grow, but I felt Mimi made the wrong choice at times during The Rift. I really liked the way S.D. Wasley explored and developed Mimi’s abilities though. Mimi discovers new aspects to what she sees, as well as two new ghosts Dot and Charlie who were oh, so cute!

Throughout The Rift, Mimi and her friends find themselves struggling with their gifts and who to trust as the rogue Astarions close in on the teens. Prophecies continue to point towards dangerous events, and our gifted characters find it hard to determine who can be trusted and who cannot. I must admit Wasley had me unsure myself—tossing up between two individuals whose motives were in question.

Keeping us on our toes and easily entertained, S.D. Wasley weaves natural teen angst, relationship drama and friendship together with magical elements and danger to create an enjoyable sequel! I'm looking forward to more.

Source: Sent for review by the author (Thank S.D!)
Format: Kindle ebook
Buy it: Amazon
My Recommendation: Fans of fantasy will enjoy this.
Cover: I'm actually a real fan of this cover. I love the color scheme and think it goes wonderfully alongside the first book.
Will I read sequel/continue with series: Yes.