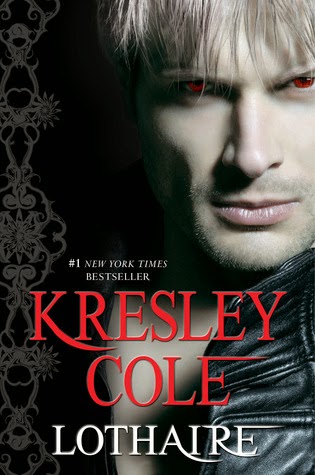 In this thrilling tale of the Immortals After Dark, #1 New York Times bestselling author Kresley Cole reveals secrets of the Lore, fierce realm of the immortals.

All Fear The Enemy Of Old

Driven by his insatiable need for revenge, Lothaire, the Lore’s most ruthless vampire, plots to seize the Horde’s crown. But bloodlust and torture have left him on the brink of madness—until he finds Elizabeth Peirce, the key to his victory. He captures the unique young mortal, intending to offer up her very soul in exchange for power, yet Elizabeth soothes his tormented mind and awakens within him emotions Lothaire believed he could no longer experience.

A Deadly Force Dwells Within Her

Growing up in desperate poverty, Ellie Peirce yearned for a better life, never imagining she’d be convicted of murder—or that an evil immortal would abduct her from death row. But Lothaire is no savior, as he himself plans to sacrifice Ellie in one month’s time. And yet the vampire seems to ache for her touch, showering her with wealth and sexual pleasure. In a bid to save her soul, Ellie surrenders her body to the wicked vampire, while vowing to protect her heart.

Elizabeth tempts Lothaire beyond reason, as only his fated mate could. As the month draws to a close, he must choose between a millennia-old blood vendetta and his irresistible prisoner. Will Lothaire succumb to the miseries of his past . . . or risk everything for a future with her?

Lothaire is the eagerly awaited addition to the Immortals After Dark series that finally tells the Enemy of Old's tale, in true Kresley Cole fashion!

You know what? I was quite impressed with this book. Lothaire has always been a real enigma in this series. A seemingly evil vampire with a mysterious past and unknown motives, Lothaire has often been painted as the "bad guy", so to say I had high expectations for his story was an understatement. I wondered what Kresley Cole would do with his tale and how she would write Lothaire's story.

I have to say, Cole really has done a good job with this book. Pairing Lothaire with a human is a stroke of genius on Kresley Cole's past as this arrogant, self serving vampire has to face the fact that he's been fated to a being he considers beneath him. Lothaire does so much growing in this book, but Cole stay's so very true to Lothaire's character at the same time. He's not evil per say, but he's arrogant and selfish and only cares about himself in the beginning. His nature is to hurt first and care never. Everything has to be for his benefit and he expects people to bend to his every whim.

Lothaire was a real contradiction for me. There's a part of him that screams evil, and there were plenty of times his actions irked me, but he was also very beguiling. This maddened vampire, with his haunted past and his distrust managed to worm his way into my heart with his mixed up notions of loyalty and tenderness. Cole forces Lothaire to face some harsh truths and accept a lot of things; managing to make him a better person in the end. His story often seemed like a train wreck--you know, you want to look away, but you really can't, and yet for some reason it was incredible addictive.

I must say, Elizabeth, or Ellie as she is known, was a strange female for Lothaire in my mind. This simple mountain girl with her hillbilly twang and gentle nature seemed like the last female that would ever win her way into the Enemy of Old's heart. And yet as he fought to bring Saroya to the front, believing her to be his Bride and thus destroying Ellie's soul forever, Ellie managed to find herself. She was likeable and brave where it counted, though my biggest issue with her was her easy forgiveness of Lothaire's cruel actions. Which when I really think about it is hypocritical, seeing as I did like Lothaire myself.

As I've previously mentioned Lothaire and Ellie seemed like the oddest of matches, but they really work. I think someone like Lothaire needed someone like Ellie. It may have been a long, long journey, filled with a lot of bumps and hiccups, especially on his part, but these two managed to slip so well into each other. Ellie wormed her way into Lothaire's heart and as he began to understand how he had hurt her and as he started to want to be a different person for her, everything just fell into place.

The introduction of the Dacians and the revelation of Lothaire's heritage and history opens up a whole new door to this world. I know Kresley Cole has a spin off series planned, featuring many of these characters introduced in Lothaire and I for one am glad, because just this tiny snippet into Lothaire's long lost family has me eager to see their stories told!

Written perfectly and detailing Lothaire's tale as only Kresley Cole could, Lothaire finally see's Lothaire find his Bride, find his self and finally discover what happiness really is.

Source: Purchased by me from The Book Depository
Format: Paperback
Buy it: Bookworld | The Nile | The Book Depository | Amazon
My Recommendation: A must read installment in the series.....
Cover: It's quite striking.
Will I read sequel/continue with series: Definitely.