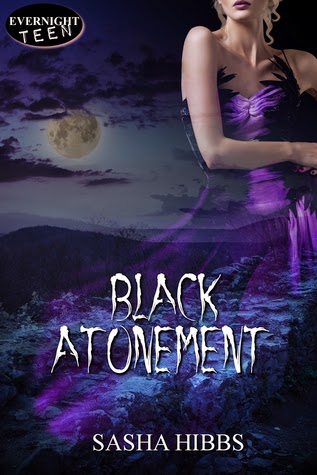 The burden of Dave’s girlfriend’s death pushes Brandi, the Seraph of Love, to abduct David Howels in hopes of protecting Dave from his murderous father. Will Brandi be able to show Dave that all in life is not lost in death? Twists and turns abound as Brandi discovers her own shocking revelation—that Dave has been her soul mate all along.

Separating Dave and herself from their allies on the threshold of the apocalypse, Brandi turns to an old friend for help—a witch—to aid her in her quest to prepare Dave to face his worst fears and her own. Filled with curses, and secrets that threaten to destroy everything, Brandi must find forgiveness from within before she can find love. In the past, healing a broken heart would’ve been easy, but now faced with the task of healing Dave’s broken heart while not exposing her own, Brandi learns why love is truly the greatest gift of all.

Black Atonement by Sasha Hibbs is the third book in the Vulcan Legacies and is a story of redemption and forgiveness, told through the eyes of Brandi, the Seraph of Love and allowing readers an insight into her mind and heart for the first time.

After the shocking events of Black Abaddon, Brandi is left reeling to discover that Dave is her predestined soul-mate and someone she shared a childhood with, never knowing the boy she scorned was the person she had been waiting centuries for. Only now Dave is shattered, having lost his own soul-mate Lucy at the hands of his father, leaving him in a world of pain. Brandi believes herself undeserving of Dave but is willing to delve into the very depths of the Void if it means helping him get justice for his lost love and rescuing his twin sister Jessica who is trapped in the clutches of their father. As Brandi and Dave set out to rescue Jessica, they’ll find themselves on a path to forgiveness and learn to love again.

I was really excited when I learnt this book would be told through Brandi’s eyes and that the object of her affection would be Dave. Dave experienced a tremendous loss in the last book when Lucy was killed, but as adorable as they were together, there’s something extremely special about the idea of him ending up with Brandi. Something Hibbs explores in this novel beautifully.

Black Atonement is shorter than the previous two novels in the series, and is told through Brandi’s POV, a first in this series with the others told through Ally’s eyes. Sasha Hibbs allows readers to explore Brandi like never before and paints the Seraph of Love as we’ve never seen her before. It was wonderful to see past Brandi’s cold, harsh exterior and see she really isn’t as mean as she comes across. The reasons behind many of her actions were explored and explained and Sasha Hibbs allowed us to see into the heart of Brandi.

I really appreciated how Hibbs explored the relationship between Brandi and Dave in Black Atonement. Hibbs doesn’t diminish what Dave felt for Lucy and doesn’t shy around his pain. He doesn’t immediately fall in love with Brandi and instead Hibbs showcases their childhoods together to show how turbulent their relationship has been throughout their lives and plants the seed for a new beginning between them.

Black Atonement is quite exciting despite being a short read and opens many possibilities for the next novel. Brandi and Dave still have a long way to go, but I look forward to seeing them continue to grow as a couple as I have no doubt they will in the rest of the series and look forward joining Ally on her journey again in the next novel!

Source: Sent for review by the author (Thank you Sasha!)
Format: Kindle ebook
Buy it:  The Book Depository | Amazon | Barnes & Noble | Kobo
My Recommendation: If you enjoy this series you will NOT want to miss Brandi's tale.
Cover: I love the all the covers in this series and this one is no exception!
Will I read sequel/continue with series: Yes!