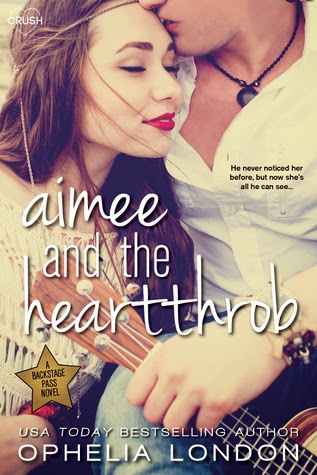 He never noticed her before, but now she’s all he can see…

Miles Carlisle is every teen girl’s fantasy. His rugged good looks and exotic British accent have helped catapult his boy band, Seconds to Juliet, to super-stardom. But after two disastrous and very public breakups, Miles isn’t interested in dating just any girl; he wants The One. And the only girl he’s interested in is not only his best friend’s little sister―and off-limits―but won’t even give him the time of day…

As a kid, Aimee Bingham had a huge thing for Miles…until he made fun of her for always tagging along. Now that she’s outgrown both him and her pigtails. the prospect of spending two weeks on tour with the childhood crush who broke her heart isn’t exactly enticing. Except now Miles seems interested. Very interested. And no matter how hard Aimee tries to resist him, her crush is definitely making a comeback.

Aimee and the Heartthrob by Ophelia London is a delicious contemporary romance that features two brilliant characters and an addictive romance you’ll be unable to put down!

Aimee and the Heartthrob follows two very different teenagers who are living two very different lives but sees them falling for one another when they’re brought together after years apart. British born Miles Carlisle is a member of America’s number one boy band Seconds to Juliet. Alongside his four other bandmates, Miles’s life is an endless string of tours, music and paparazzi. Caught up in the public eye, Miles wishes someone would see past his public persona but the last thing he expected was that that person would be a girl he knew as a kid and left long ago.

Aimee Bingham is a normal teenage girl who had her heart broken when her brother’s best friend Miles left and landed an international music career, taking him far away from her, the girl who secretly loved him for years. Though two years have passed, Aimee is afraid of rekindling her crush, and facing the same heartbreak when she finds herself accompanying her brother on Seconds to Juliet’s latest tour over the summer. Both teens are in for a surprise as Aimee discovers Miles is still the wonderful guy she fell for all those years ago and Miles quickly realizes that the young girl who used to follow him around like a puppy is now a beautiful, funny and sassy young woman. With their attraction to each other impossible to deny, Aimee and Miles soon find themselves falling headfirst in love.......

I found Aimee and the Heartthrob to be a really enjoyable read. Ophelia London does everything right in this novel with her characters, atmosphere and chemistry spot on. Aimee is living every teenage girl’s fantasy in Aimee and the Heartthrob and London encompasses this wonderfully. I felt excited and giddy whilst reading this novel and I know I’m already invested in following the other Seconds to Juliet members if possible.

Aimee and Miles were really great characters. They were normal, down to earth and really easy to follow. I loved seeing the story unfold through both their eyes with Aimee and the Heartthrob told in varying POV’s. Aimee was sweet and sassy and the kind of girl you can’t help but like and Miles was a truly genuine guy; likable but cheeky and perfectly put together and very, very charming.

I really appreciated that Ophelia London gave Miles and Aimee a history in this novel. It gave some real substance to their relationship considering they had known each other since they were children. Aimee knew Miles before he became a household name and saw him still as the boy she idolized as a young girl, even though he was now a young man and very much the superstar he was----less a lot of the drama. The chemistry between Miles and Aimee was wonderful—this novel straddles the line between YA and NA and was sexy and simmering without being too descriptive or heavy. It was the perfect balance and swoon inducing romance.

Sweet, charming and very, very addictive, Aimee and the Heartthrob left me raring for more and ready to read more from both Ophelia London and about the Seconds to Juliet boys! I highly recommend this if you're a fan of teenage contemporary reads with wonderful romance!

Source: Sent for review by Entangled Publishing via Netgalley (Thanks Rachel!)
Format: Kindle ebook
Buy it: Amazon | Barnes & Noble | Kobo
My Recommendation: If you love contemporary YA, you won't want to miss this!
Cover: It's cute and fun.
Will I read sequel/continue with series: Yes! Can't wait for more Seconds to Juliet.......