Book Shelf: Dragons Are People, Too by Sarah Nicolas 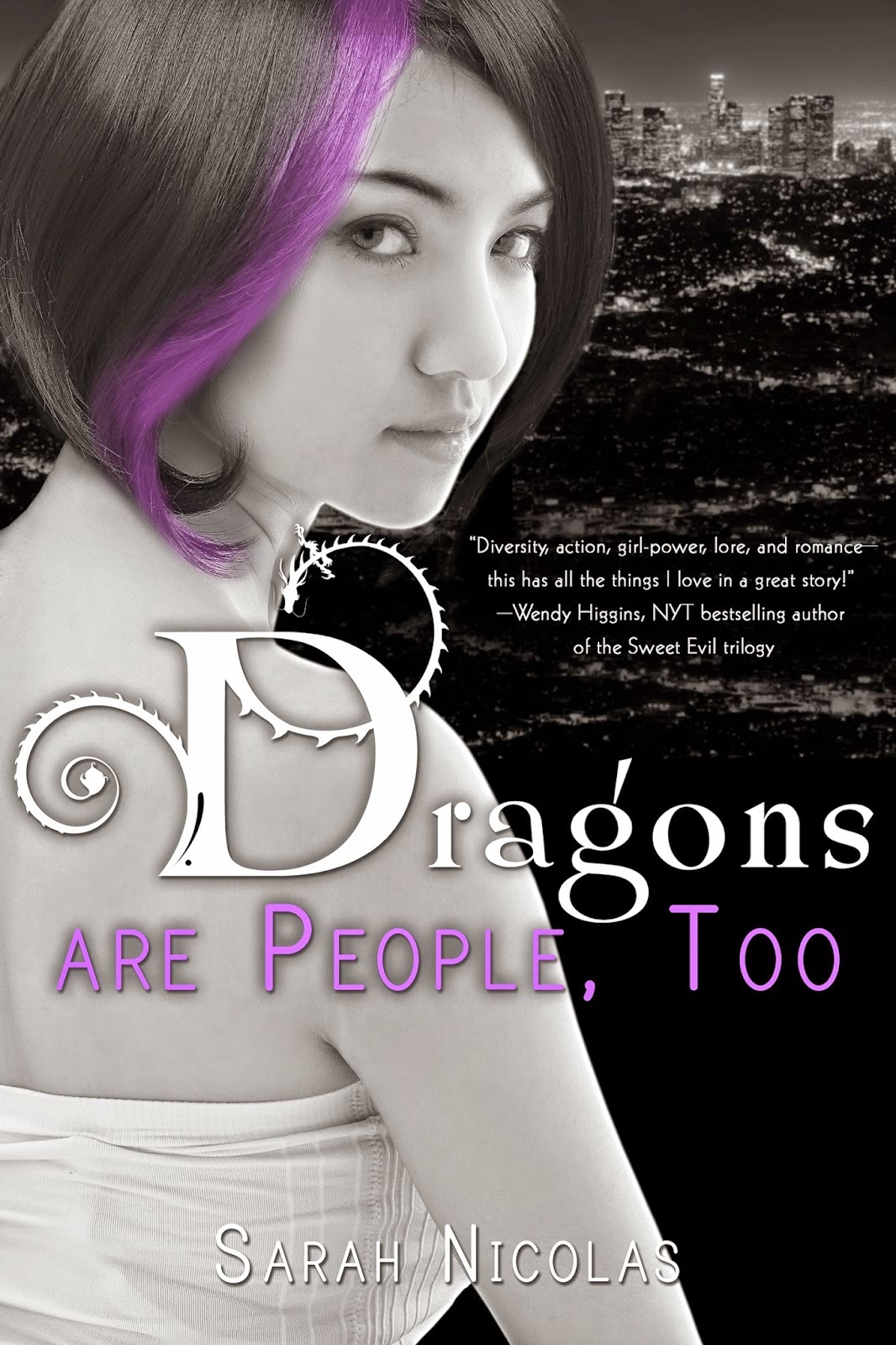 Never judge a dragon
by her human cover...

Sixteen-year-old Kitty Lung has everyone convinced she’s a normal teen—not a secret government operative, not the one charged with protecting the president’s son, and certainly not a were-dragon. The only one she trusts with the truth is her best friend—and secret crush—the über-hot Bulisani Mathe.

Then a junior operative breaks Rule Number One by changing into his dragon form in public—on Kitty’s watch—and suddenly, the world knows. About dragons. About the Draconic Intelligence Command (DIC) Kitty works for. About Kitty herself.

Now the government is hunting down and incarcerating dragons to stop a public panic, and a new shape-shifting enemy has kidnapped the president’s son. Kitty and Bulisani are the last free dragons, wanted by both their allies and their enemies. If they can’t rescue the president’s son and liberate their fellow dragons before getting caught themselves, dragons might never live free again.

Dragons Are People, Too by Sarah Nicolas is a really well written and sassy debut novel that really is pure fun to read and is sure to easily entertain.

Sixteen year old Kitty Lung has never been a normal teenager. Not only does she come from a long line of renowned were-dragons, but she’s a secret government operative tasked with protecting the President of the United States’ teenage son. Capable and confidant, Kitty is good at her job, but when her latest mission turns bad and an agent under her instruction changes form on camera, the were-dragons are revealed to the world. To stop panic from spreading, the American government steps in and in begin imprisoning dragons with only Kitty and her best friend, and secret crush, Sani free. And in the midst of all this, is a successful kidnapping of the president’s son that leaves Kitty out for blood and prepared to rescue her friend and charge, even if it means disobeying orders…..

There’s nothing bad I can say about this urban-fantasy novel. Sarah Nicolas has obviously thought long and hard about the backstory behind her world in Dragons Are People, Too and implements it wonderfully. Nicolas won me over by choosing to introduce different types of dragons to the story, from those within Chinese folklore and the more popular English dragons of medieval lore. I thought this was really cleaver and appreciated the multicultural feel it brought to the story, especially when combined with Kitty’s Chinese heritage and Sani’s African background.

Kitty was likable and easy to follow as the main character. Her voice was sassy with plenty of attitude. Her inner monologue was funny and entertaining to read and I liked her attitude towards the world. At the end of the day Kitty is still a sixteen year old girl, so I’m going to forgive her constant reference to Sani, her crush, and the endless appreciation of his physique, abilities and calm approach to everything she seemed to have.

The storyline within Dragons Are People, Too was entertaining to read. The story was easy to follow and the characters Kitty meets and knows are colourful and bring a little something each to the story. There’s enough humour, romance and action to keep you on your toes and the abilities of the dragons and Kitty’s dragon form make for an easy reading experience.

My only issue with this novel was the ending; the ending was too erupt and seemed to come out of nowhere. Not a cliffhanger per say, the final chapter of Dragons Are People, Too leaves the story open to a sequel as there wasn’t really any resolution to one of the obstacles Kitty faced during the story. Sarah Nicolas left me wanting more from Kitty, Sani and their associates and I hope for another story!

Light, entertaining and just downright fun, Dragons Are People, Too is a great young adult urban fantasy which explores were-dragons in a delightful manner that is sure to entertain from beginning to end.

Source: Sent for review by YA Bound Book Tours and the author (Thanks ladies!)
Format: Kindle ebook
Buy it: Amazon | Barnes & Noble | Kobo
My Recommendation: This is a great YA urban-fantasy!
Cover: This cover is wonderful and represents Kitty perfectly.
Will I read sequel/continue with series: I'd like to read more if Sarah Nicolas writes more......