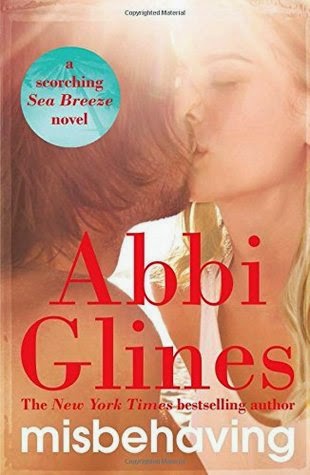 Jason is sick of living in his rock star brother’s shadow. So when he ships off to Sea Breeze, Alabama, he’s looking for a much deserved escape and a chance to blow off some envious steam. Falling for the local bad girl was definitely not the plan. But as the new duo enjoys some naughty fun in the Alabama sun, Jason learns that even though Jax is the musician in the family, he’s not the only brother who can rock someone’s world.

Misbehaving is the stunning sixth installment in Abbi Glines mouth watering Sea Breeze series and is one of my favorite books in the series yet! Sensual and sizzling, Misbehaving finally tells the story of Jason Stone the woman who steals, his heart bad girl Jess and is without a doubt Abbi Glines at her best!

As a self proclaimed Abbi Glines fan, I do adore all of her novels, but admittedly some more than others. I have certain favorites I just couldn't get enough of when reading and Misbehaving is one of them. I literally breezed through this novel because I found myself so thoroughly drawn into and entranced by Jason and Jess's story. They may be as different as two people can get, but boy do these two have an amazing connection--I love it!

Readers first met Jason Stone in Breathe, and the brother of rocker Jax Stone soon became someone we all wanted to read more of. Thanks to his appearance in Amanda and Preston's tale Just For Now and his unsuccessful attempt at winning the girl, Jason Stone has been someone I've been dying to know more about. And I'm so very pleased to have finally read his tale.

Personally, I think Abbi Glines may have surprised her readers by pairing Jason with bad girl Jess, one of the minor villainesses of some of the other books in the series, but now having read Misbehaving, I think this was an absolutely brilliant move on her part. These two may be very different, but they just fit so very well.

Having read Misbehaving, I now think Jess is one of my favorite characters in this series! Told in the dual POV's of both Jason and Jess, Misbehaving allows us to discover a very different side of Jess than we've ever seen before, and my heart just broke....and melted, for this strong, vulnerable and misunderstood young woman.

Jess is someone who's had such a difficult life and it's heart breaking knowing that she's had to fight for every scrap of affection that she's had from men throughout her life. As someone who really only just wants to be loved, Jess has made the mistake of using her looks and her body to try and win people over. As a tall and sexy blonde bombshell, Jess has been used repeatedly for her body and it's really sad because the nasty persona she displays really is nothing but a shield for her to protect her heart. Jess wants more from her life, but she knows there's little chance that she'll ever make it out of the small town she's spent her life in.

Jason is the brother of a rock star and someone who is sick of living in his brothers shadow. He may enjoy the benefits that being linked with someone famous brings, but he's sick of being used for the people he knows. Jason isn't looking for love or a relationship, but when he meets Jess though, all bets are off, because even though Jess is exactly the kind of person who could use Jason's status to better herself, the last thing this contradiction of a girl does it want Jason for his money and fame.

I really like Jason. Always have, always will, and I really enjoyed seeing him feature in this novel. Honestly, it's about time he received his own story and I'm thrilled that Abbi Glines didn't disappoint with his tale! Jason, despite his fame and money is just a all round good guy. He comes to care for Jess so deeply and I love how in the end he stands up for her and is able to give her exactly when she needs and deserves.

Jason and Jess have such an electric relationship and Abbi Glines writes them so perfectly. I honestly thought these were some of the best sex scenes we've seen from Glines recently and only enhanced our reading pleasure. Jess and Jason are so cute and I love how happy they make each other.

As always it's great to see the other characters from past and present in the series, and I am excited about Krit's story next. He really seemed like he wanted to make something with Jess and I think he truly cares about her, maybe even loves her. So in saying that, I can't wait to meet the woman who knocks him off his feet--I know it's going to be one hell of a story!

Extremely sexy and oh, so addictive Misbehaving was another brilliant Sea Breeze novel that will leave readers satisfied but still very ready for more!

Source: Sent for review by Simon & Schuster Australia (Thank you Jenifer!)
Format: Paperback
Buy it: Bookworld | The Nile | The Book Depository | Amazon
My Recommendation: This is a brilliant series and needs to be read!
Cover: At first I was a bit thrown by the change in the theme for our Australian covers, but I do like the fresh feel of this cover.
Will I read sequel/continue with series: YES!