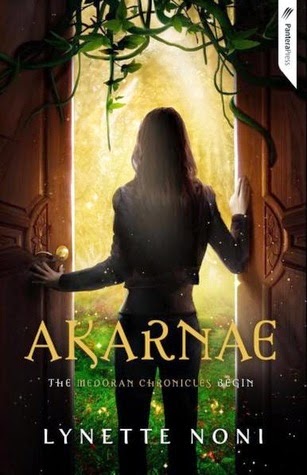 Dreading her first day at a new school, Alex is stunned when she walks through a doorway and finds herself stranded in Medora, a fantasy world full of impossibilities. Desperate to return home, she learns that only a man named Professor Marselle can help her... but he's missing.

While waiting for him to reappear, Alex attends Akarnae Academy, Medora's boarding school for teenagers with extraordinary gifts. She soon starts to enjoy her bizarre new world and the friends who embrace her as one of their own, but strange things are happening at Akarnae, and Alex can't ignore her fear that something unexpected... something sinister... is looming.

An unwilling pawn in a deadly game, Alex's shoulders bear the crushing weight of an entire race's survival. Only she can save the Medorans, but what if doing so prevents her from ever returning home?

Will Alex risk her entire world--and maybe even her life--to save Medora?

Akarnae is Harry Potter meets the Chronicles of Narnia in the first novel of Australian author Lynette Noni's debut series The Medoran Chronicles! A whimsical fantasy tale full of adventure and friendship, Akarnae is vividly descriptive, exciting and will leave you raring for more!

Akarnae follow's sixteen year old Alexandra Jennings whose life takes a interesting turn when she walks through a doorway on the first day at her new boarding school and finds herself literally in another world. Landing in the world of Medora, Alex discovers that there are more wonders and possibilities out there than she could ever have imagined, and the one person who could possibly help get her home is missing. Forced to wait until his return, Alex begins attending Akarnae Academy, a boarding school for Medorian's with amazing gifts; a school that will push and challenge her more mentally, physically and emotionally than ever before.

As she begins to embrace Akarnae Academy and find a home within the strange new world she could never have imagined existed, Alex makes begins to make powerful friendships and starts to discover just what she is capable of. And yet as Alex finds her place within Akarnae Academy, a mysterious individual finds her repeatedly along the way, and Alex can't help but realize something sinister is lurking behind his pretty face and beautiful eyes.....he has a plan to destroy Medora and he'll use Alex to do so, whether she wants him to or not.....

Akarnae was a very impressive debut! As the first novel in a new series, this story has been perfectly written, explored and planned. Author Lynette Noni has already established such a strong and well rounded world within the pages of this book. There's so much texture and layers to the story that I can't even imagine what Noni will do next, even though it's evidently clear that Alex's journey is only just beginning.

Alex's world literally changes when she walks through a doorway to Medora. She's stranded far from her world and her parents and everything she's ever know, and her only hope of getting back is a man who no one can seem to find. It'd be understandable if Alex gave into her fears and worry about being in Medora but instead she chooses to embrace her new life her and manages to pass the weeks and months by attending classes and honing her skills. Alex is quite down to earth and normal, but in true fantasy style, she's the kind of heroine who steps up when she needs to, even if she is Medora's only hope. Personally I really enjoyed following Alex and throught she was a worthy main character.

To be perfectly honest, the thing that manages to make Akarnae so great is that Noni weaves together so many different elements to make a fantastic story. Her writing is solid, and in the tradition of worlds like Harry Potter, Medora is vivid and fun and endlessly surprising. Akarnae Academy features different classes on the most different of subjects, all tasked with testing it's students, and Alex and her friends manage to get up to tones of trouble during the school year, managing to have more than one unexpected adventure.

I was thrilled with the friendship's and relationships Alex builds during this first book. Akarnae students Jordan and Bear are two of the first people Alex meets upon her arrival in Medora and they welcome her into their fold with open arms. Both boys are cheeky and entertaining and come to care deeply about Alex as a friend; making for some endearing moments between the three as their friendship becomes as solid as humanly possible.

Alex does struggle to connect with many of her other classmates at first but towards the end of the novel makes some serious strides with her roommate D.C. and her Combat classmates; particularly Declan, a big burly guy and Kaiden, a charming young man who unexpectedly makes Alex's heart race. Alex also manages to interact wonderfully with her professors and Akarnae staff, including Fletcher, the head of the Med Ward and the person Alex sees when she is injured. Sporting more than her fair share of injuries over the course of her stay in Medora, Fletcher is more than good to his most frequent patient. Honestly I could go on and go.....

From mysterious new friends, to talking suits of armor, and even a Library that's quite literally alive, Akarnae has it all. Lynette Noni sets up her fantasy world perfectly and will without a doubt sweep you up into the world of Medora. Leaving you begging to join Alex on her next advendure in Medora, Akarnae is sure to be a hit with fantasy and adventure lovers alike!

Source: Sent for review by both Simon & Schuster Australia and Pantera Press (Thanks guys!)
Format: Paperback
Buy it: Bookworld | The Book Depository | Amazon  | Akarnae Website
My Recommendation: Fans of Harry Pooter, The Chronicles of Nania and a good fantasy tale will adore this!
Cover: This cover is really pretty and looks even better in person.
Will I read sequel/continue with series: YES!