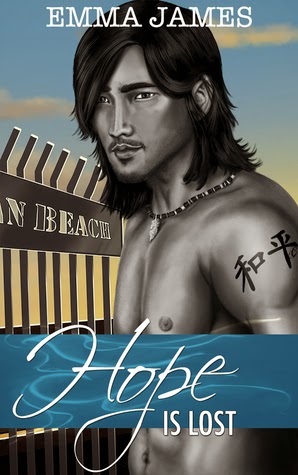 “When the power of love overcomes the love of power, the world will know peace.”
-Jimi Hendrix

Keanu Lee, the funny man, finds himself on the sticky end of a night out with his best friend Levi. Keanu's life is about to take another unexpected, sharp turn. New friends will be found under the most unique circumstances.

Hope Walker is a lost soul, and Ajax, the street performer, is her unspoken protector. Together, they survive the streets of Ocean Beach.

Life has a way of righting wrongs when you least expect it.

Come join this sexy crew as they show you that, even though life may take from you, it can also give back when you least anticipate it.

The Ocean Beach series continues with the brotherhood, passion, and laughter you have grown to love, and through the eyes of these survivors, you will realize love can truly heal.

The past will never be forgotten, but there is hope if you just allow yourself to have a little faith.

Hope Is Lost is the second book in Emma Jame’s New Adult series, Ocean Beach and is the next chapter is the lives of the characters who call Ocean Beach home. Join this close knit band of brothers as they move on from the loss of losing someone close, fall in love and learn to truly live again!

Hope Is Lost continues to follow the lives of Faith and her late brother Chance’s best friends, a group of lads living, working and surviving together. Harley, Text, Keanu, Levi and Retro are as thick as thieves and together with a number of other memorable characters including, Slade and Phoenix make the seaside town of Ocean Beach home. Faith’s arrival in Ocean Beach after the death of her brother years prior has begun to have an outward effect on the men who loved Chance and this series sees them begin to make new discoveries and changes to their lives.

Ocean Beach isn’t your typical romance series. While two of the Ocean Beach men have found love in consecutive novels; Retro and now Keanu, these novels don’t follow the typical format and feature one couple at a time, but rather follow all of the characters within the series. The majority of characters have a voice in each novel at some point in time, and whilst this may seem daunting at first; keeping track of the multiple characters and their individual lives and desires, after a while it becomes second nature to jump from one POV to the next, dependent on how central each character is to the story at any given point in time.

Personally I quite like all the characters in the series and the way they interact and relate to each other. They are a very close bunch, especially the boys, and care for each other a great deal. Though Chance died years before, each still holds a fair deal amount of pain from losing their "brother" and some of those who were on the island when he died are also physically affected by the bomb and fire that tore apart the night club. All those affected are quite resilient however, Keanu and Levi in particular and have managed to bounce back and continue on with their lives quite well all things considering.

Each installment in this series so far has brought a lot of light and love to these characters lives. Two of them have already found love and with the hints of other romances already in the air, I’m quite excited to see what Emma James plans for Levi, as well as Slade and Phoenix. I have to admit, Slade holds a special place in my heart and I'd be lying if I didn't admit the scenes in Hope Is Lost with him and the kitten just melted my heart!

As this chapter of the series concludes, I for one can’t wait to read the next book. Things are shaping up fantastically and I’m looking forward to seeing what Emma James has in store next. As Hope Is Lost concludes, there’s no doubt on my mind though that the question that is sure to be on every fan’s mind, is just who is Hudson Raine?? I for one can’t wait to find out!

Source: Sent for review by the author (Thank you Emma!)
Format: Kindle ebook
Buy it: Amazon US | Amazon AU | Amazon UK | Barnes & Noble | iBooks | Kobo
My Recommendation: This is a very interesting NA series and so worth a read!
Cover: Normally I'm not the biggest fan of cartoon fans, but I love how well the one's in this series go together; obviously very well thought out!
Will I read sequel/continue with series: Yes......