Book Shelf: Dreams of a Dark Warrior (Immortals After Dark #11) by Kresley Cole 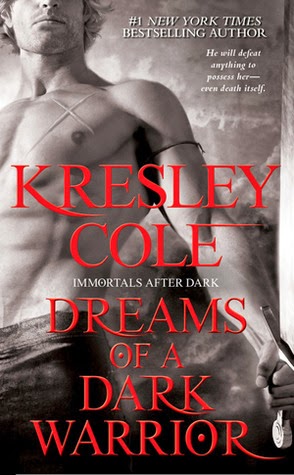 From #1 New York Times bestseller Kresley Cole comes this gripping tale of a battle-maddenend warrior driven by revenge and the Valkyrie temptress who haunts his dreams.

Murdered before he could wed Regin the Radiant, warlord Aidan the Fierce seeks his beloved through eternity, reborn again and again into new identities, yet with no memory of his past lives.

She Awaits His Return...

When Regin encounters Declan Chase, a brutal Celtic soldier, she recognizes her proud warlord reincarnated. But Declan takes her captive, intending retribution against all immortals—unaware that he belongs to their world.

To Sate A Desire More Powerful Than Death...

Yet every reincarnation comes with a price, for Aidan is doomed to die when he remembers his past. To save herself from Declan’s torments, will Regin rekindle memories of the passion they once shared—even if it means once again losing the only man she could ever love?

Dreams of a Dark Warrior is the 11th installment in the Immortals After Dark series by brilliant author Kresley Cole and is just as addictive as the previous ones in the series.

Dreams of a Dark Warrior really was an unexpected delight. After the last book, I wasn't sure what to expect heading into this one. Considering Chase was the leader of the Order and the man responsible for Regin's kidnapping and treatment, I was intrigued to see how Kresley Cole would spin their romance from enemies to lovers....and I have to say, she did a good job. Not that I really expected anything else!

The story within this book was a really interesting one. Two lovers finding each other over the centuries only to lose each other every time....there's something alluring about that. Especially when you consider the personality changes and lives experienced by Declan, AKA Aidan the Fierce and Regin the Radiant who's lived forever and holds all her memories of each reincarnated lover.

Regin was actually a surprise for me in this book. Having always been the prankster and the loud-mouthed immature one, Dreams of a Dark Warrior shows a really different side to her. Here we see her vulnerable and very normal. She was just another girl afraid of losing the one she loved and getting her heart broken. And I liked seeing that about her--oh, she was still a kick-ass Valkerie, but she was also softer at times.

And I found I really liked Declan. And I wasn't sure I would. Here was a guy who hated the Lore and had been behind a lot of actions that had urological effects on the characters I loved. I thought I would struggle to forgive him for that and get over his past mistakes, but Cole quickly made it clear that Declan was a lot more than he seemed. He was broken and scared, both physically and emotionally, and as Regin slowly fell for him, so did I. I wanted to protect him; this fierce, stoic soldier, and couldn't help but adore him as he began to learn the truth about who, and what, he was and as he came to terms with what he'd done and what that meant.

As I previously mentioned, the relationship between Regin and Declan was one steeped in history. From their first relationship as Regin and Aidan, through every one that followed, these two were meant to be together. They were drawn to one another, and Cole manages to write a brilliant romance as we slip into the past, but stay very much in the present with these two. I liked that Declan was Aidan, but he was also Declan. Declan may have been Aidan at one point and may have held his memories, but he was also himself and that was who Regin fell in love with.

This was a really interesting installment in the series. We're introduced to a number of new characters that jump on my list of whose stories I long to hear; Lanthe is a big one as well as Nix, but I also find myself yearning to hear the tale of Vincent and his succubus, Brandt, and Natalya and Thad, who I actually have a feeling may end up together, despite her involvement with Brandt in this book. Regardless, Kresley Cole has me hooked on this series like never before, and as I head into Lothaire's story, one thing's for sure....it's gonna be a hell of a tale!

Source: Bought by me from The Book Depository
Format: Paperback
Buy it: Bookworld | The Nile | The Book Depository | Amazon
My Recommendation: This is a fantastic PNR series and a must read for fans of the genre!
Cover: Another great cover in the series!
Will I read sequel/continue with series: Oh absolutely yes!