Book Shelf: All Fall Down (Embassy Row #1) by Ally Carter 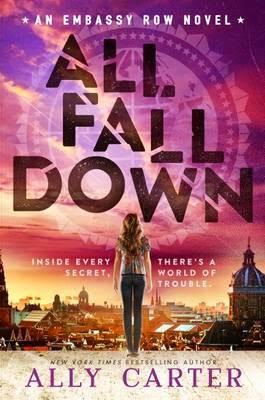 2. Her mother was murdered

3. Someday she is going to find the killer and make him pay

The thing is, nobody else believes her and there's no-one she can trust. Not her grandfather, a powerful ambassador. Not her new friends, who all live on Embassy Row. Not Alexei, the Russian boy next door, who is keeping his eye on Grace for reasons she neither likes nor understands.

Grace's past has come back to haunt her... and if she doesn't stop it, Grace isn't the only one who will get hurt. Because on Embassy Row, the countries of the world stand like dominoes and one wrong move can make them all fall down.

All Fall Down by bestselling author Ally Carter is the first novel in her new Embassy Row series and is a well written and highly mysterious story.

Grace is an Army brat and the granddaughter an American Ambassador. Grace’s life has been nothing but move after move and summers spent at the Embassy where her grandfather lives. At least it was, until Grace’s mother was murdered three years before in front of Grace’s very eyes and her life began to unravel. With everyone around her certain her mother’s death was an accident, no one will accept that Grace saw her mother’s killer in the act. Grace has spent years trying to convince everyone she is not crazy and refuses to give up protesting the truth, but when she’s forced to move in with her grandfather on Embassy Row, Grace begins to discover that the truth about her mother’s death may be more horrific than she first thought…..

All Fall Down is a bit of a mixed bucket for me. Though this is the first novel by Ally Carter that I have read, I am well aware of her prestige amongst the YA world and how well loved she is for her Gallagher Girls and Heist Society series, but I have to say....I’m a little bit underwhelmed by this novel. All Fall Down is in no way a bad book and is completely deserving of all three stars that I’m rating it, however it lacked the draw and power I was hoping for heading into the novel.

Carter’s writing is solid throughout this novel and I appreciate her desire to explore the different countries and governments brought together on Embassy Row; so nicknamed this for all the different embassies situated on the same street by the numerous teenagers who call Embassy Row home. The premise of this novel seemed quite promising, but I felt the novel progressed too slowly for my tastes and I felt as though we didn’t accomplish much by the end of the story. Personally I could have liked a faster pace and more excitement, but at the same time this doesn’t diminish the discoveries our main character makes and the shocking revelation she discovers at the end.

Grace was a satisfying main character to follow and I liked her tenacity. Grace has a reputation as a trouble maker and a risk taker; something she has been all her life, even prior to her mother’s passing. I enjoyed Grace’s strength and desire to uncover the truth in this novel and liked that Carter gave her some vulnerabilities as well. Grace has been slightly unstable since her mother’s death, with all those around her believing her to be, pardon the phrase, crazy, and I appreciated that this was explored.

The other characters in the novel were likable and I partially loved the Embassy children, Noah, Rosie and Megan that Grace bonded with. The hint of a potential romance with Russian Alexi was promising, but wasn’t very strong; something I would have loved to have seen more of, being a hopeless romantic and all. I’m honestly not sure where Carter will go with their relationship, but considering their dynamic I’m excited to see regardless.

As far as first novels go, All Fall Down sets the stage well. While it didn’t blow me away per say, I did quite enjoy it and would be very interested in picking up the next book to see what happens next and to see if any of Grace’s mothers secrets are revealed!

Source: Sent for review by Scholastic Australia (Thanks guys!)
Format: Hardback
Buy it: Bookworld | The Nile | The Book Depository | Amazon
My Recommendation: Ally Carter and mystery fans will want to read this.
Cover: I think the colours of this is very striking and I do quite like this cover....
Will I read sequel/continue with series: Yes, I would like to see what happens next.