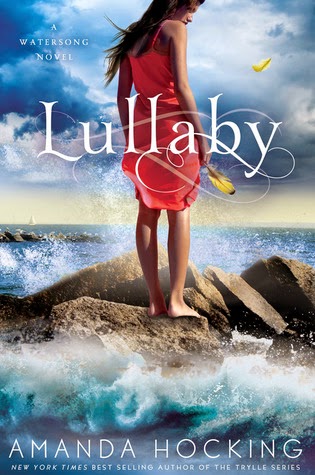 Don't miss the next chapter of Watersong, a bold new series that will enchant you, entrance you, and hold you captive under its spell

Now that Gemma Fisher has inherited Penn, Lexi, and Thea's curse - and all the strange new powers that come along with it - she has no choice but to run away with them. Devastated that she has to leave everyone she loves behind, she's still determined not to give in to the unspeakable hungers that plague her.
Unfortunately, they're growing stronger every day, and she's not sure how much longer she can resist.
Harper won't give up on finding her sister Gemma, vowing to get her back no matter what the cost. The search draws her closer to too-gorgeous-for-his-own-good Daniel, and tests her fiercely guarded independence like never before. She's always been the strong one who everyone else depends on.... Can she let herself depend on Daniel?

As Gemma and Harper plunge deeper into a magical world they barely understand, it becomes painfully clear that Gemma's old life may be lost forever. But can she still hold on to her humanity?

Lullaby is the second novel in Amanda Hocking’s Watersong Quartet and picks up where the first novel left off, once more following sisters Gemma and Harper as they try to adjust to Gemma’s newfound status as a siren.

Picking up not long after the first novel concluded with Gemma running off with Penn, Thea and Lexi in an attempt to protect those she loves, Lullaby continues to follow sixteen year old Gemma who is now a siren and her eighteen year old Harper, who is desperately trying to find her sister and find a way to stop the sirens curse.

Even though it’s taken me a while to begin this series, I’m quite enjoying it so far—more than I anticipated I would if I’m being honest. Both Wake and Lullaby haven’t been overly fast novels and instead seem to progress at a steady pace, but I like the way Hocking has told the story so far and find myself entertained by the characters, even when witnessing mundane moments and experiences.

In Lullaby, Gemma is truly struggling with life as a siren, finding her health declining as she fights her basic siren instincts to feed and enjoy the water. The guilt and her understandable attitude war with what her body needs and even though she knows it is wrong to do certain things, her own body and instincts take over; forcing her to partake in heinous acts.

On the other side we have Harper. Strong, levelheaded Harper who is fighting to find her sister and rescue her from the clutches of the mermaids she left with. Harper who is slowly falling apart as she attempts to find a balance between searching for the sister she loves and living her life as she has to without telling her father her sister’s secret.

I’m going to be honest here……none of the characters in this series have quite as much personality and depth as a lot of characters out there, but there’s something about them all that I like; something that just makes them fit the story. They’re neither too much nor too little and are just enough to have me like them and be interested in their struggles. Plus is doesn’t hurt that Amanda Hocking has thrown some romance in there!

The ending of this novel wasn’t what I was expecting and there is a part of me that feels like this is the calm before the storm. Penn gave up way too easily, and it’s obvious from what she said that she has nefarious plans in store for Gemma. Personally I feel maybe Thea might become an unexpected ally and I look forward to seeing where Amanda Hocking takes the series next.

Source: Sent for review by Pan Macmillan Australia (Thank you guys!)
Format: Paperback
Buy it: Bookworld | The Nile | The Book Depository | Amazon
My Recommendation: An exciting siren adventure
Cover: I think it's pretty
Will I read sequel/continue with series: Yes