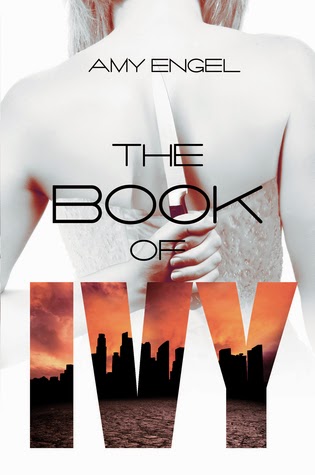 After a brutal nuclear war, the United States was left decimated. A small group of survivors eventually banded together, but only after more conflict over which family would govern the new nation. The Westfalls lost. Fifty years later, peace and control are maintained by marrying the daughters of the losing side to the sons of the winning group in a yearly ritual.

This year, it is my turn.

My name is Ivy Westfall, and my mission is simple: to kill the president’s son—my soon-to-be husband—and restore the Westfall family to power.

But Bishop Lattimer is either a very skilled actor or he’s not the cruel, heartless boy my family warned me to expect. He might even be the one person in this world who truly understands me. But there is no escape from my fate. I am the only one who can restore the Westfall legacy.

Because Bishop must die. And I must be the one to kill him…

Expertly written and sensationally paced, The Book of Ivy by Amy Engel is a fantastic dystopian novel that proves to be one of my favorite books of the year! This debut novel is impossible to put down and even more impossible to forget as Engel introduces readers to an enticing new world with characters you can’t help but fall in love with!

Set in a futuristic dystopian world that was once torn apart by war and is continuously plagued by disease and social differences, The Book if Ivy introduces readers to a world where young men and women from two different sides of the social divide are paired up and married off at the age of sixteen in an attempt to increase population and maintain the fragile peace that has existed since one side of the war triumphed over the other and took control of the government and law enforcement.

Told though the eyes of Ivy Westfall, Amy Engel tells an addictive tale of romance and personal grown. As the youngest daughter of a man wanting to overthrow the president of their nation, Ivy has a lot expected of her, the least of which being that she is expected to kill Bishop Lattimer, the son of the president and Ivy’s new husband. In a world where woman find themselves married off to perfect strangers and expected to be a "wives" straight away, Bishop surprises Ivy when he doesn’t expect anything of her; instead choosing to treat her with kindness and respect. Always told the Lattimer’s were monsters, Ivy faces tough choice after tough choice when she must choose between acting out her families wishes or being true to the young man who is slowly worming his way into her heart…..

I have to say I really liked Ivy in this novel. She’s a young woman who has been taught and treated a certain way her whole life. Those who love her and those she love have ingrained certain ideas and beliefs into her that it’s not until she marries Bishop and is out on her own that she slowly begins to see a different side of things. Ivy is sweet and innocent, but brave in her thoughts and hopes. She has her own opinions and isn’t afraid to show them. She wants to make the world a better place and even if she’s misguided in the beginning I genuinely enjoyed seeing her eyes opened by knowing Bishop and spending time with him.

Bishop won me over in The Book of Ivy with his quiet, thinking nature and his ability to look at the bigger picture. There is something so incredibly sexy and appealing about a man who is kind and considerate and has honor, something Bishop has in spades. He’s not at all what Ivy expected and I really appreciated how Engel has written their relationship. In all honesty, the slowly developing relationship between Ivy and Bishop is a highlight of the novel; perfectly explored and developed.

Ivy and Bishop are different in many ways but both think and feel very similar at times too. They come from different sides of the social spectrum and are both influenced by their family. Forced to marry without really having a say, it would be no surprise if they hated each other. Instead Bishop’s straightforward and sincere nature win Ivy over as he encourages her to think for herself and treats her with nothing but kindness and respect. Ivy and Bishop have great chemistry that Amy Engel explores perfectly as Ivy slowly finds herself falling for Bishop. He’s a perfect gentleman and it’s understandable that he manages to get past her defenses.

As Ivy learns some hard truths and life lessons throughout the story, Amy Engel will utterly captivate her readers with her intense new world and wonderful characters. Ivy makes a difficult choice at the end of The Book of Ivy that sees her torn from everyone she loves and I cannot wait to see what Engel plans next!

Source: Sent for review by YA Book Bound Tours and the author (Thank you ladies!)
Format: Kindle ebook
Buy it: Amazon | The Book Depository | Barnes & Noble | Kobo
My Recommendation: Fans of Disruption by Jessica Shirvington and a good dystopian read will not want to miss this!
Cover: It's pretty cool....
Will I read sequel/continue with series: YES!