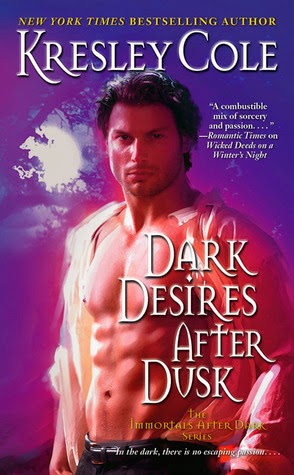 RITA Award-winning author Kresley Cole continues her bestselling Immortals After Dark series with this electrifying tale of a ruthless demon mercenary and the lovely young halfling who enchants him.

A seductive beauty he can never have, yet can't resist...
Cadeon Woede will stop at nothing to atone for the one wrong that will haunt him forever. But once he secures the key to his redemption, the halfling Holly Ashwin, Cade finds that the woman he thought he could use for his own ends and then forget haunts him as much as his past.

A tormented warrior she should fear, but can't deny...
Raised as a human, Holly never knew that some frightening legends are real until she encounters a brutal demon who inexplicably guards her like a treasure. Thrust into a sensual new world of myth and power, with him as her protector, she begins to crave the demon's wicked touch.

Surrender to dark desires...
Yet just when he earns Holly's trust, will Cade be forced to betray the only woman who can sate his wildest needs -- and claim his heart?

Dark Desires After Dusk is yet another beguilling installment in the Immortals After Dark series by Kresley Cole and is an exciting, sensual romance that will have you entranced the entire way through!

Alright, so I'm a fan of this series. After five books in, it's fair to say that the Immortals After Dark book are as addictive as they are exciting. Cole blends romance with brilliant characters and thrilling danger in each tale and Dark Desires After Dusk is no exception; choc-full of passion and tension.

I was really excited to read Cadeon's story. Ever since we met him in Wicked Deeds on a Winter's Night, I've been eager to see him find his female, and after the ending of the pervious book, that briefly allowed us to see Cadeon with his fated female, I've been even more excited to see Cadeon win over his "human" Holly.

I really dug Cade in this book. He really was between a rock and a hard place for a lot of the story; torn between retrieving his brothers crown or protecting his female. Cade had a lot of hard choices to make, but I feel he handled himself very well. Holly was his, and he treated her as such. This cocky, arrogant demon was brought to his knees by this sweet, intelligent firecracker who was so much more than she appeared and I loved it!

Cole created a really great heroine to read about in Holly. She was very flawed with her OCD and her fears, but she comes into her own as the book progresses and she learns about her Valkyrie heritage; becoming a really strong person along the way.

I really liked the relationship they develops between Cade and Holly. There's is a very intense attraction that neither can deny, though Holly spends a lot of the book wishing she could and I really liked seeing Holly experience sex and passion for the first time with Cade. It was intense and steamy and very, very hot.

As this book comes to an end, I find myself more than ready to pick up Rydstrom's story to find out just what is happening between him and Sabine!

Source: I Bought
Format: Paperback
Buy it: Bookworld | The Nile | The Book Depository | Amazon
My Recommendation: A great PNR series
Cover: Fits well with the rest in the series....
Will I read sequel/continue with series: Yes