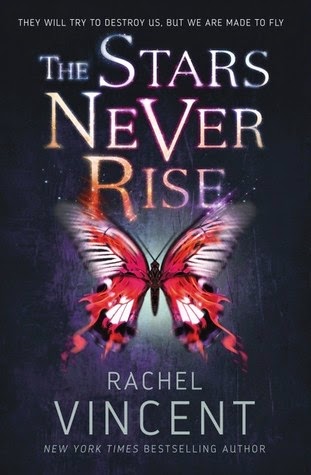 The Stars Never Rise by Rachel Vincent
Releases on: June 9th 2015
Add on Goodreads!
Sixteen-year-old Nina Kane should be worrying about her immortal soul, but she's too busy trying to actually survive. Her town's population has been decimated by soul-consuming demons, and souls are in short supply. Watching over her younger sister, Mellie, and scraping together food and money are all that matters. The two of them are a family. They gave up on their deadbeat mom a long time ago.

When Nina discovers that Mellie is keeping a secret that threatens their very existence, she'll do anything to protect her. Because in New Temperance, sins are prosecuted as crimes by the brutal Church and its army of black-robed exorcists. And Mellie's sin has put her in serious trouble.

To keep them both alive, Nina will need to trust Finn, a fugitive with deep green eyes who has already saved her life once and who might just be an exorcist. But what kind of exorcist wears a hoodie?

Wanted by the Church and hunted by dark forces, Nina knows she can't survive on her own. She needs Finn and his group of rogue friends just as much as they need her.
Thoughts:
I'm a big fan of Rachel Vincent's Soul Screamers series and I'm really excited about this new one from her! This book sounds so fabulous and I'm just eager to get my hot little hands on it!


What do you think of The Stars Never Rise? Will YOU be adding it on your TBR list?
And what are you waiting on this week?