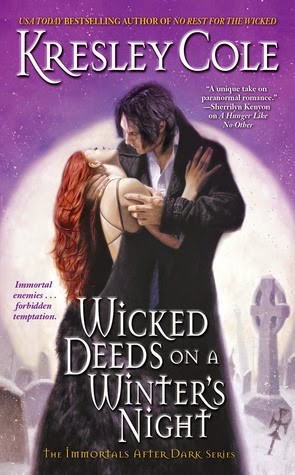 This seductive paranormal series continues with a brutal Highland werewolf and an exquisite young witch, adversaries with a blood vendetta between them.

Her breathless kiss haunts him...

Bowen MacRieve of the Lykae clan was nearly destroyed when he lost the one woman meant for him. The ruthless warrior grew even colder, never taking another to his bed—until a smoldering encounter with his enemy, Mariketa the Awaited, reawakens his darkest desires. When sinister forces unite against her, the Highlander finds himself using all his strength and skill to keep her alive.

His slow, hot touch is irresistible...

Temporarily stripped of her powers, Mari is forced to take refuge with her sworn adversary. It's rumored that no one can tempt Bowen's hardened heart, but soon passion burns between them. Though a future together is impossible, she fears he has no intention of letting her go.

No deed is too wicked for her seduction...

If they defeat the evil that surrounds them, can Mari deny Bowen when he demands her body and soul—or will she risk everything for her fierce protector?

Wicked Deeds On A Winter's Night is the sizzling third full length installment in Kresley Cole's Immortals After Dark series and is a passion fuelled adventure from beginning to end!

I have to be honest...I wasn't sure going into the book whether I'd love it or not. While I was intrigued by Bowen and his history, I admit there were also a few moments in the previous two books where his self pity and attitude already annoyed me. So ultimately, I wondered whether or not this would become an issue in this book. I'm pleased to say this wasn't the case....at all.

I was really happy to find that I quite liked Bowen in this book. He wasn't who he seemed and for an alpha male, he wasn't too overbearing, as I found Lachlain to be in the first book. Mariketa too was fantastic--I really loved this sassy witch, who had a feisty attitude and strong personality. She seemed like the perfect blend of twenty three year old girl and powerful supernatural being.

And of course, what made me love our two main characters all the much more was the fantastic dynamic they had together. Cole creates great chemistry and intensity with these two and they really are the perfect match for each other. Bowen needed a female like Mari to keep him on his toes and stand up to him--taking none of his bull along the way, and Mari needed someone like Bowen, with his fierce nature and ability to love her above everything else.

I very much enjoyed what Cole did with this book. I enjoyed the relationship between Bowen and Mariketa and how Kresley Cole explored it during the story. It was entertaining seeing the two interact, especially as the sexual attraction and tension is there from the beginning with them, though neither wants to admit it at first, and I enjoyed watching Cole explain Bowen's past with his lost love Mariah--it made the story extra interesting to watch unfold.

Taking aside the first book in this series, which I wasn't too fussed itn Immortals After Dark is proving to be an enjoyable series to read so far and I already look forward to beginning the next book......

Source: I bought
Format: Paperback
Buy it: Bookworld | The Nile | The Book Depository | Amazon
My Recommendation: This is a great PNR series
Cover: I think it's a bit cheesy ;)
Will I read sequel/continue with series: Definitely