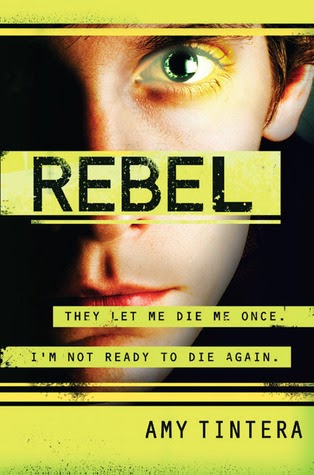 The sequel and exciting conclusion to the action-packed Reboot.

Wren and Callum finally reach the Reboot Reservation, a safe haven from HARC, which controls the cities. But it isn’t the paradise they’d hoped for. As they learn more about Micah, the bloodthirsty Reboot who runs it, they discover that he’s been creating an army with one goal in mind: to kill the humans in the cities … ALL of them. Wren’s first instinct is to head out for new territory, but Callum can’t stand by and let his human family and everyone else be hunted down. With HARC on one side and Micah on the other, saving the innocent and forging a lasting peace between humans and Reboots is a nearly impossible task. But Wren and Callum have never let that stop them before.

As the sequel and conclusion to Amy Tintera's sensational debut novel Reboot, Rebel is as thrilling and as exciting as it's predecessor, and will catch you from the opening chapter with it's gripping storyline and electrifying romance!

Personally I adored Reboot and I was so thrilled to find I loved Rebel just as much, if not more! Amy Tintera once more writes a novel that is not only superbly written, but whose storyline is as captivating as it's characters! Tintera changes the way we witness the novel by writing Rebel different from her first. Unlike Reboot which was told entirely through Wren's eyes, Rebel now switches back and forth between Wren and Callum's POV's, something that truly heightens the reading experience; allowing us to see though both our most prominent characters eyes.

Picking up almost exactly where the first book ended, Rebel continues to follow Wren and Callum now that they've escaped the HARC facilities with the Austin Reboot's and sees them venturing out to start a new life on the Reboot Reservation. What they discover isn't what they except; with those leading the Reboot Reservation having dark plans for the human and Reboot population.

Rebel truly was a very thrilling novel. Tintera manages to keep it extremely fast paced, while introducing new characters and new dangers. The plotline is different than the first, with Wren, Callum and the other Reboots really trying to find their place in the world and a way they can live that works with minimal disruption to those around them. Both Wren and Callum are forced to face some hard truths in order to protect those they care about and lead.

As our heroine, I was very impressed with Wren in this novel. She's still the strong, powerful and kick-ass heroine that I loved in the first novel, but throughout the course of the two books she's also come a long way and really grown as an individual. Rebel really highlights the changes in Wren, and personally I enjoyed seeing her display more vulnerabilities. Tintera has penned a very strong main character in Wren, but has also built her up over time.

In Rebel, Wren makes different choices than she would have made in Reboot and this sees her become a happier person. That's not to say everything hasn't been hard, because it has. Tintera puts Wren, and really all her characters through a lot, emotionally and physically, but in the end Wren manages to overcome them to find a place of happiness and contentment she's never known.

Rebel sees a lot of development with our main characters, and not just with Wren. Callum has equally been developing. At his base, Callum is a very good, kind person and he's always seen the world in such a light way. As a twenty-two, he's managed to hold onto a lot more of his humanity than other Reboots and because of this he's struggled to see the same as most Reboots do. And yet in Rebel, Tintera forces Callum to really open his eyes and this sees him take on some of the responsibility that Wren has previously shouldered and he has taken for granted.

Personally I loved that Callum never really loses his zest for life in Rebel, but he also grows a great deal. When unforeseen events see Callum taking on a leadership role he wouldn't normally have, Callum actually manages to thrive. Callum opens his eyes to the humans in this book, and although he's still as caring and attentive as he's always been, Callum also comes to accept what he is and his differences like he hasn't before. He's still the light to Wren's darker nature, but he's also strong on his own.

Throughout Rebel the Reboots and humans struggle to work together, something that makes things endlessly difficult for our characters, but in the end I was thrilled with the comfortable place they found together. As the conclusion to a two-part series, Amy Tintera wraps Rebel up very nicely. I felt a sense of closure for the characters at the end and yet Rebel left things very hopeful for the future.

Fast-paced and delicously thrilling, this series blends strong and likable characters with giddy romance and forward moving action. Rebel is an exhilerating but perfect ending to a brilliant series, and although I'm sad to see it end, Amy Tintera couldn't have concluded it an better as far as I'm concerned!

Source: Sent for review by Allen & Unwin (Thank you Lara!)
Format: Paperback
Buy it: Bookworld | The Nile | The Book Depository | Amazon
My Recommendation: If you love a good dystopian read then you won't want to miss this amazing series!
Cover: Fits perfectly with the first book.
Will I read sequel/continue with series: Sadly this is the last book in this series, but I look forward to more by Amy Tintera!