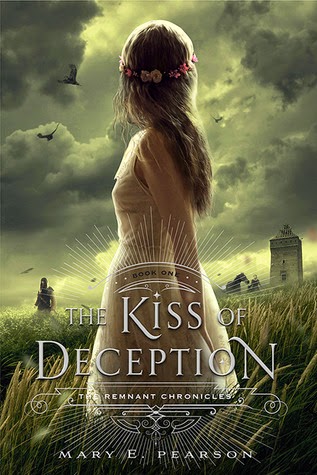 The Kiss of Deception by Mary E. Pearson
Releases on: July 15th 2014
Add on Goodreads!

In this timeless new trilogy about love and sacrifice, a princess must find her place in a reborn world.

In a society steeped in tradition, Princess Lia’s life follows a preordained course. As First Daughter, she is expected to have the revered gift of sight—but she doesn’t—and she knows her parents are perpetrating a sham when they arrange her marriage to secure an alliance with a neighboring kingdom—to a prince she has never met.

On the morning of her wedding, Lia flees to a distant village. She settles into a new life, hopeful when two mysterious and handsome strangers arrive—and unaware that one is the jilted prince and the other an assassin sent to kill her. Deception abounds, and Lia finds herself on the brink of unlocking perilous secrets—even as she finds herself falling in love.

Thoughts:
This. Book. Sounds. So. Good! I really love the sound of it--I mean two love interests where one is the prince the main characters was supposed to marry but didn't and the other is an assassin to is supposed to killer her? Hello awesome!


What do you think of The Kiss of Deception? Does it sound like something you would read?
And what are you waiting on this week?