This week I'm waiting on.....
Banished by Liz de Jager 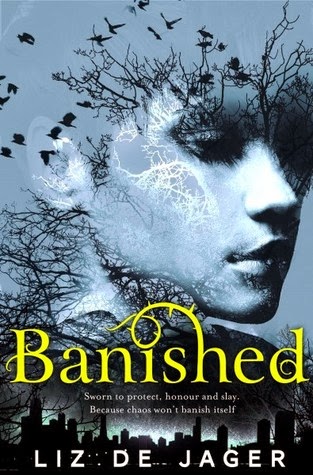 Sworn to protect, honour and slay. Because chaos won’t banish itself…

Kit is proud to be a Blackhart, now she’s encountered her unorthodox cousins and their strange lives. And her home-schooling now includes spells, fighting enemy fae and using ancient weapons. But it’s not until she rescues a rather handsome fae prince, fighting for his life on the edge of Blackhart Manor, that her training really kicks in. With her family away on various missions, Kit must protect Prince Thorn, rely on new friends and use her own unfamiliar magic to stay ahead of Thorn’s enemies. As things go from bad to apocalyptic, fae battle fae in a war that threatens to spill into the human world. Then Kit pits herself against the Elder Gods themselves – it’s that or lose everyone she’s learnt to love.

Thoughts:
Man, does this sound awesome or what?!? Kit sounds like a kick-ass heroine and I'm always down for the Fae. Love me some faeries! Throw in a Fae prince, a bit of romance and a war and this sounds like it could be a hell of a read!

What do you think of Banished? Sound good?
And what are you waiting on this week?