Book Shelf: The Iron Traitor (The Iron Fey: Call of the Forgotten #2) by Julie Kagawa 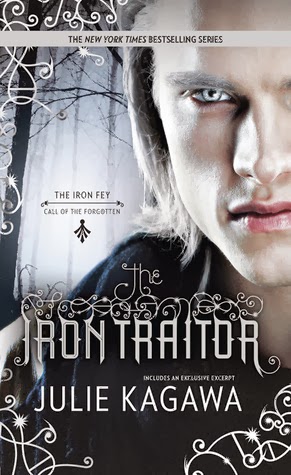 In the real world, when you vanish into thin air for a week, people tend to notice.

After his unexpected journey into the lands of the fey, Ethan Chase just wants to get back to normal. Well, as "normal" as you can be when you see faeries every day of your life. Suddenly the former loner with the bad reputation has someone to try for-his girlfriend, Kenzie. Never mind that he's forbidden to see her again.

But when your name is Ethan Chase and your sister is one of the most powerful faeries in the Nevernever, "normal" simply isn't to be. For Ethan's nephew, Keirran, is missing, and may be on the verge of doing something unthinkable in the name of saving his own love. Something that will fracture the human and faery worlds forever, and give rise to the dangerous fey known as the Forgotten. As Ethan's and Keirran's fates entwine and Keirran slips further into darkness, Ethan's next choice may decide the fate of them all.

The Iron Traitor is the highly anticipated, but immensely shocking follow up to The Iron Prince and is an unpredictable story of adventure, magic and romance. The lush world of fae, danger and heartbreak is as tantalizing as ever in this latest installment!

Julie Kagawa is a master of words; plain and simple. Even though at times The Iron Traitor read more like a "filler novel" than I expected, it was still a very deliciously well told and adventurous read! Continuing to draw readers into her magical world of the Nevernever, Kagawa continues her exploration and development of her characters as Ethan, Keirran, and Kenzie delve back into the lands of Faery in the search of a way to save Keirran's love with the help of a few friends, both old and new!

I adore Julie Kagawa's writing and her ability as a storyteller never fails to captivate me. The Iron Traitor wasn't quite as fast paced as some of her previous books; rather plodding along nicely, with plenty of different hurdle's and difficulties arising for the characters though minor in comparison to others in the series.

The world Kagawa has created within this series, and the previous one is a wondrous one and I continually find myself getting lost in her world and writing. Lush, rich and harshly magical, I never know what to expect and what Julie Kagawa is going to weave into the story.

Ethan is quite likable as the main character and I enjoyed seeing things progress through his eyes. When I first began this series I was unsure how the change of protagonists from Megan to Ethan from the other books would work, but oddly I don't find myself comparing the two as much as I expected. Considering his early introduction into the world of Faery, Ethan is very capable and this becomes abundantly clear with each book.

In The Iron Traitor, Ethan's relationships with the other characters continue to develop in interesting ways. I like Ethan and Kenzie together; I'm intrigued to see what happens considering her health situation--I'm looking forward to seeing how that all unfolds in future books. Kerrian is a complete mystery to me and I'm still working out his loyalties and motives--he and Ethan could potentially have a strong friendship but right now plot twists could derail that.

It's a blast from the past with Megan, Ash and Puck all making appearances. Plus Razor continues to be an adorable addition to the story with his mannerisms and cuteness. Featuring a shocking betrayal and jaw-dropping ending that takes cliff hanger endings to another level, The Iron Traitor races towards a climactic ending that will leave readers shaking their heads and praying for more even as they turn the final page!

Julie Kagawa must have something big up her sleeve if The Iron Traitor is anything to go by and I for one will be marking my calendar for the release of the next book!

Source: Sent for review by HarlequinTEEN Australia (Thank you Polina!)
Format: Paperback
Buy it: Bookworld | The Nile | The Book Depository | Amazon
My Recommendation: If you love deliciously written stories, the fae or the first series, then this is right up your alley!
Cover: I think it could be the most beautiful of all the Iron Fey novels yet!
Will I read sequel/continue with series: Without a doubt!