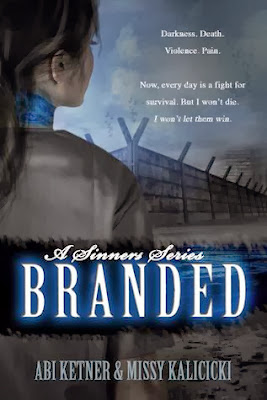 Fifty years ago the Commander came into power and murdered all who opposed him. In his warped mind, the seven deadly sins were the downfall of society. He created the Hole where sinners are branded according to their sins and might survive a few years. At best.
Now LUST wraps around my neck like blue fingers strangling me. I’ve been accused of a crime I didn’t commit and now the Hole is my new home.

Now every day is a fight for survival. But I won’t die. I won’t let them win.

The Hole can’t keep me. The Hole can’t break me.
I am more than my brand. I’m a fighter.
My name is Lexi Hamilton, and this is my story.

Branded by Abi Ketner and Missy Kalicicki is a sensational debut novel that will thrill from its opening chapter! Masterfully told and brimming with edge of your seat action and raw, unbridled passion, Branded mixes forbidden and electric romance with high stakes danger in this dystopian read that will have you easily begging for more!

I have to say….wow. Just wow! Branded was phenomenal. Simply phenomenal! I’ll start out by saying that heading into this story, I wasn’t expecting that much. Perhaps it’s because its cover really doesn’t do the story justice but beginning Branded, didn’t have many expectations. I certainly wasn’t prepared for the incredibly riveting story I discovered the moment I began this book. Branded had me wanting to put all my other books down and simply read it alone; it was that good!

Masterfully written, Branded sees Abi Ketner and Missy Kalicicki work together for the first time and do these ladies ever work well together! If you weren’t aware that two authors conspired to write this book, it would be easy to think only one seasoned writer was behind Branded. The writing is raw and gritty, in perfect harmony with the aura of the harsh, dystopian world within Branded.

Both Ketner and Missy Kalicicki hold nothing back with their harsh and cruel society in Branded. There’s pain, loss and agony in so many shapes and forms and the authors don’t shy away from blood, gore and death in Branded. This is a world gone to hell and both authors do their best to make you evidently aware if it.

Deliciously paced, Branded follows Lexi Hamilton, a courageous young woman who is wrongly accused of engaging in premarital sex, a strong no-no in this society where sin is the biggest crime and the punishment is deadly. Once branded, Lexi is thrown in the Hole, a prison-like institution where life is sick, painful and enough to make your skin crawl.

As our heroine in Branded, Lexi is a joy to read about. This girl is sweet, kind and tremendously brave and I simply adore her! Lexi was just one of those characters you love from the moment you meet them. She was written so realistically, and with each horrendous situation she found herself in, the realistic and believable way she reacted kept endearing her to me more. I honestly felt that if I was in Lexi’s shoes I’d react the way she did, and then some!

Life in the Hole is beyond terrible for Lexi. Treated less like a human being, she’s lost, alone and stripped of all she is, but it’s in the company of her stoic and unexpectedly kind guard Cole that Lexi finds her first touch of kindness. Cole proves to be an unending supporter and protector for Lexi, and despite their differences in a world where a guard is not allow to associate with a prisoner under his care, Lexi and Cole form an unexpected friendship that blossoms into a fierce and powerful romance.

The relationship between Lexi and Cole is the kind I tend to go gaga over! First off, Cole is an incredible man—fierce, brave and honorable and he truly cares for Lexi. Though theirs is a relationship utmost forbidden in this society, Lexi and Cole connect from the very beginning. Cole is kind to Lexi when all other guards are cruel, and there is a sexual tension and attraction between them that sizzles and entices from the very beginning. Their dynamic is electric and the connection delightful. I’ll sooooo totally loving these two—I’ll be cheering for them no matter what!

Though Cole is Lexi’s first touch of kindness, he isn’t her last, with Lexi making friends in the form of Sutton; a kind doctor with his own secrets, Bruno; another guard who like Cole treats her with respect and kindness and Zeus; Cole’s loyal attack dog who becomes Lexi’s champion and defender. I loved all these characters, especially Zeus who becomes a form of comfort for Lexi as well as a protector.

I will admit, there was a part towards the last quarter or so of the book where the atmosphere seemed to shift and I found I didn’t feel as engrossed as I previously had. While this is a time Lexi finds a family connection she’d thought she’d lost as well as a newfound strength of self, it also took her away from someone I didn’t want her to be away from and I found I really missed him.

Branded is an exhilarating debut that will have you on the edge of your seat and entirely captivated with is gripping storyline and fantastic characters. Heading straight towards an action packed ending, Branded is guaranteed to worm its ways into your system and leave you crying out for more!

Source: Sent for review by YA Bound Book Tours and the authors (Thanks you ladies!)
Format: Kindle ebook
Buy it: Bookworld | The Book Depository | Amazon | Barnes & Noble
My Recommendation: This book is brilliant. You need to READ IT!
Cover: I don't mind it--loving the blue but as the same time I don't think it does the story the justice it deserves.
Will I read sequel/continue with series: Without a doubt!