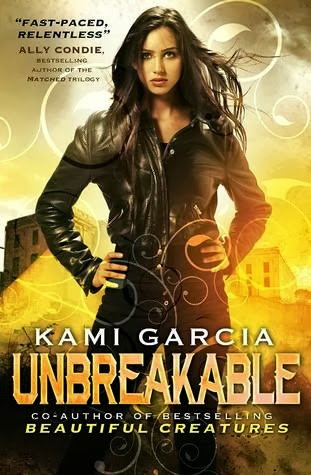 Kennedy Waters didn't believe in ghosts, until one tried to kill her.

When Kennedy finds her mother dead, her world begins to unravel. She doesn't know that evil forces in a much darker world are the ones pulling the strings. Not until identical twins Jared and Lukas Lockhart break into her house and destroy a dangerous spirit sent to kill her. The brothers reveal that her mother was part of an ancient secret society responsible for protecting the world from a vengeful demon - a society whose five members were all murdered on the same night.

Now Kennedy has to take her mother's place in the Legion if she wants to uncover the truth and stay alive. Along with new Legion members Priest and Alara, the teens race to find the only weapon that might be able to destroy the demon - battling the deadly spirits he controls every step of the way.

Suspense, romance, and the paranormal meet in this chilling urban fantasy, the first book in a new series from Kami Garcia, bestselling co-author of the Beautiful Creatures novels.

Launching straight into an exhilarating storyline, Unbreakable is a fast paced and highly addictive read that will draw you in from the very beginning with it's perfect blend of action, romance and all things supernatural!

I have to say, I thoroughly enjoyed Unbreakable. Kami Garcia manages to capture her readers attention from the opening chapter of this story and the excitement doesn't let up all the way through. Unbreakable turned out to be a surprisingly quick read; it was impossible not to breeze through this story as everything that unfolded just seemed to get better and better with the turn of every page.

The storyline within Unbreakable was something I really enjoyed. In a way it's very simple, but the intricate way Garcia connects the characters and the society made it just that more exciting. Honestly, who doesn't love seeing some good old fashion, and well told, ghost hunting? I know I certainly do, and seeing our heroine Kennedy discover her place in this dangerous world she's suddenly discovered she just may be a part of was fun to witness!

Kami Garcia's writing is never too over baring with this book and instead lends itself to tell a perfectly paced story. I loved  the characters in Unbreakable and the sharp, riveting dynamic they come to share made reading about their adventure all that more satisfying. Garcia has done a great job with the storyline; it was certainly enough to keep me immensely entertained, so I was very happy to see how well her characters complimented it.

Our main character Kennedy is the perfect girl to follow in this story. Garcia writes her insecurities and conflictions well, and her desire to fit somewhere only makes you feel for her more. Priest and Alara are entertaining as the weapons genius and resident "tough girl" with a soft interior and add some substantial friendships to the story.

Twins Jared and Lukas provide the very different love interests for Kennedy as two brothers that couldn't be more different and whose tedious relationship often spills over into their work. I have to say, Jared and Lukas are reminiscent of Supernatural's Sam and Dean Winchester; something that, as a fan of the show, I reviled in. It's impossible not to draw similarities as the plotline takes on a similar feel at times, but I found that this didn't bother me too much as it was too well written and exciting.

Unbreakable features just the perfect hint of romance to compliment the action and supernatural based storyline, and with two very different brothers distinct possibilities for Kennedy, I'm quite happy with who her heart has begun to belong to as one brother stands out in my eyes with hix quieter nature and hidden depth mixed in amongst the capable and fierce ghost hunter he is.

With a shocking ending that I for one wasn't expecting, but that promises so many possibilities and complications for the rest of the series, I cannot wait for the next book in this series! Featuring ghosts, dangers and delicious romance, Unbreakable will take you on one hell of a ride you won't want to end!

Source: Sent for review by Simon & Schuster Australia (Thank you Jennifer!)
Format: Paperback
Buy it: Bookworld | The Nile | The Book Depository | Amazon
My Recommendation: Action fans are sure to get a kick out of this. Plus anyone who enjoys TV's Supernatural will love the dynamic between the brothers
Cover: This is seriously a bad-ass cover. I adore it!
Will I read sequel/continue with series: Yes