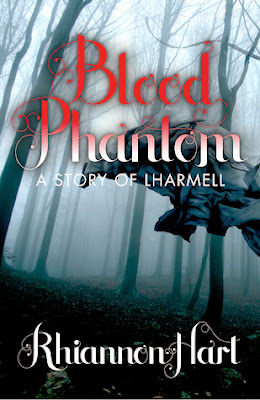 Life in tatters and far from home, Rodden Lothskorn struggles to cope with the harming menace and his own harming nature. When an offer of marriage reaches his friend, Prince Amis, Rodden discovers that the bride’s inhospitable homeland might contain one part of the harming poison he would dearly like to get his hands on. But if summoned northwards, will Princess Lilith bring something – or someone – he dreads most with her? Locked in a years-long struggle with the Lharmellins, Rodden senses the battle is only now about to begin.

Blood Phantom is a delightful, abet short prequel novella to Rhiannon Hart’s Lharmell series, and tells a Lharmell tale in Rodden’s POV for the first time--something fans have been eager for!

Considering how much I adore this series, I was personally crushed to discover that Random House Australia wouldn’t be publishing the rest of the series. It seemed such a shame when it was evident after the end of the last book, Rhiannon had a lot more stories too tell, and so I must say I’m quite please that she decided to publish the rest of the series, and this prequel novella, independently.

Rodden has always been an exceptional male lead, and a really appealing character. While I’ll be honest, this small glimpse into Rodden’s thoughts and feelings wasn’t enough (let’s face it—it never was going to be), I do feel so much more satisfied having read this short story.

Admittedly, Hart doesn’t go into too much detail about what is to come, so I think already having read the other books allows you as the reader to understand the significance of some of the things Rodden makes reference to in this novella. And that being said, as I have read the other books I appreciated the moments with Rodden all that more, because I knew what awaited him in the future, what Zerephina would come to mean to him and he to her and the battles they would have both together and apart.

Perfectly told and enticingly so, Blood Phantom is an excellent treat for fans of this series to glimpse more of what they love—Rodden!

Source: Sent for review by the author (Thank you Rhiannon!)
Format: Kindle ebook
Buy it:  Amazon
My Recommendation: A must read for fans of the series and Rodden lovers
Cover: I know what the author was going for, but it doesn't do the story justice
Will I read sequel/continue with series: Yes