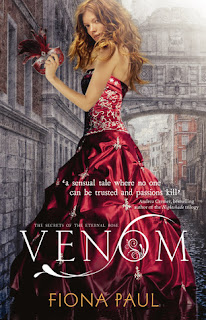 Beauty, romance, murder... A novel as stunning and seductive as Renaissance Venice itself.

Cassandra Caravello is part of Venice′s wealthy elite. Her world is one of fabulous gowns, society parties and privilege, yet she longs for something more. While her fiancé is away studying in Paris, she has a chance meeting with an artist called Falco. He is attractive, audacious...and highly unsuitable.

When Cass stumbles upon the body of a murdered woman - with a bloody X carved across her heart - she′s drawn into a dangerous world of secret societies, courtesans and killers. Falco is quick to offer his assistance, but then another body is found and Cass starts receiving death threats... Is Falco more involved than she imagined? And will she be able to stay true to her fiancé, or succumb to her uncontrollable feelings for someone she′s not even sure she can trust?

Venom is an intensely intriguing debut by Fiona Paul that mixes murder with romance in a thrilling mystery tale where passions rage and no one is as they seem!

I’m not ordinarily the biggest fan of historical fiction. I’ve read a few I’ve enjoyed and other not so much, so I was hesitant when starting Venom. Yet, I had high expectations heading into this book thanks to the fantastic description and beautiful cover…..so I’m happy to say that Venom not only lived up to my expectations, but exceeded them!

A riveting tale of murder and love, Venom is a beautifully written debut by author Fiona Paul. Paul’s writing is riveting; stunning in its beauty and detail. Set in the exquisite city of Venice, the luscious setting is gorgeously described and detailed. It’s impossible not to become swept up in the rich world of Venice in the hay day, get lost in the canals, art and the flourish that is this world.

Paul has told the story perfectly; the plotline is mysterious and consuming and you strive to understand what is going on as our heroine Cassandra journeys into the dark underworld of Venice and harsh situations all in an attempt to discover what is going on with the missing maids and courtesans, learning to live and beginning to find herself on the way.

This story feels authentic, with characters and situations right out of this time where inhibitions are hidden and those of high society do not mix with those of the lower society. I quite liked those I met throughout the story.

Cassandra was exactly what I expected. Repressed and proper, a true young woman of this time, but someone who had secrets and held a hidden fire within herself. As she took risks and learned to live I really found myself cheering for her. Keeping the company of men and journeying unchaperoned all paled in comparison to the dangers she risked as she ventured into secret moments of passion and romance. I enjoyed seeing her discover love and passion for the first time; seeing her let go and only feel. Regardless of their differences, Falco made her feel.

I quite liked Falco. He was feisty and free; with a good nature and truly was a good match for Cassandra. The two of them may have seemed like an unlikely pair and may have been experiencing a doomed romance with their different social standing her Cass’s engagement but they felt so good. What they had was passionate and true and it was beautiful seeing Cass experience the feelings of first love and what Falco brought about in her.

Paul writes confliction well throughout this book. Cass is conflicted over what she feels and what she knows to be correct. With what she wants over what others want for her. However, Fiona Paul does a good job of leaving you as the reader conflicted too. Especially where Cassandra’s two suitors are concerned. Everything Cass feels for Falco is beautiful and deep, but her fiancé Luka proves to be a fantastic character and man too. He’s kind and brave and obviously adores her. In a world where Falco never existed, it’d be so, so easy to imagine they could potentially have something beautiful together if Cass let it.

Venom proves to be a fantastic debut in every aspect. It’s thrilling and mysterious, but also lends itself to the fact that there is something more, something bigger going on in the city of Venice. As the murder comes to light, their intentions will make sense, but you as the reader also come to realize that there is a lot Cass hasn’t learnt yet, a lot that you just know Fiona Paul is going to explore in the next book and as her Secrets Of The Eternal Rose series progresses.

Featuring a beautiful setting and passionate romance, Venom is one debut you will not want to miss!

Source: Sent for review by Harper Collins Australia (Thank you guys!)
Format: Paperback
Buy it: Booktopia | The Nile | The Book Depository | Amazon
My Recommendation: Reading a bit like a tale by Cassandra Clare or Libba Bray, this book will thrill fans of a good mystery
Cover: I love our Aussie one--it's quite striking.
Will I read sequel/continue with series: Yes! I'm very eager for more!