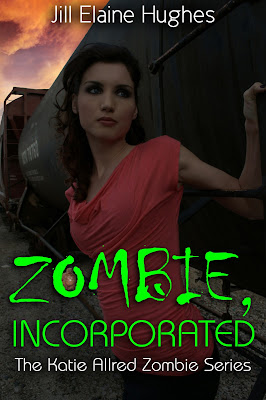 Eighteen-year-old Katie Allred is socially awkward and unpopular at school. The only child of parents who had her right out of high school, Katie is herself about to leave the nest, even though she hardly feels ready.

Katie’s new after-school job at the Zimble Box Corporation draws her into the complex social strata of high school cliques and backstabbing friends in ways she never imagined. Katie soon discovers there’s something very strange about the “in” crowd at school---and about her employer, too. Shortly after starting her new job, the Contagion breaks out, plunging her town and the entire nation into chaos as zombie shadow forces come out into the open, ravaging the streets. Katie goes into hiding and her parents disappear, along with almost everyone else she knows.

But Katie soon discovers she has special powers that help her survive. She’s a Beacon, someone with the innate ability to help zombies produce children. It’s a power her employer — and what little remains of the U.S. government — both want to exploit for their own ends. Not only that, it runs in her family---which has a secret past Katie never knew about until now.

Enter Agent Morehouse of the FBI Special Zombie Control Unit. A reformed zombie working undercover, he suppresses his urge to eat human flesh in order to serve and save humanity. But Agent Morehouse can’t help but be attracted to a Beacon like Katie, and she to him. Even as they fight zombies the world over, they must fight their intense attraction to each other, hoping to keep Katie from suffering Agent Morehouse’s terrible zombie fate.


Guest Post:
The book started out as a short story. My now-former literary agent was putting together a Zombie Romance anthology to shop with major publishers. Zombie Romance in itself is weird---when was the last time you wanted to make out with a zombie? I thought hard about the concept and wrote a short piece that eventually became ZOMBIE, INCORPORATED’s final chapter. But the short story didn’t fit with the ones from other authors so it didn’t make the anthology cut, even though the anthology sold to St. Martin’s Press. I still wanted to do more work in the world I created though. After I parted ways with the former literary agent who asked me to write it, my new agent encouraged me to expand the idea into three chapters and a book proposal, so I did. That book proposal also went nowhere, since the setting for the story involved an 18-year-old girl who was embarking on her first job in the adult world---not the norm for the zombie genre, but it is the norm for the emerging New Adult genre. But I just couldn’t let the idea go, so I wrote what is now the first installment in a planned three-book series.

I completed the manuscript and my literary representation still showed little to no interest in a New Adult zombie series. But I know readers are demanding New Adult paranormal books even if publishers aren’t putting them out, so I just went the self-publishing route instead of waiting for publishers to catch up with readers. The worldbuilding and character development for this series is substantial, and Book One ends on a cliffhanger as the heroine’s zombie romantic interest finally makes his first appearance.

It’s ironic---I couldn’t get editors or my own literary agents to read the book because it was so outside the zombie norm (it’s a New Adult psychological thriller!), but reader response has been fantastic. Readers love the book and are demanding more, more, more! My agent is now very interested, and has even asked a New York Times bestselling author (I’ll announce who it is later) to do a cover blurb for me. Goes to show that a good book will always find an audience, no matter how different it is!

Author Jill Elaine Hughes in her own words!
I'm an independent author of New Adult (mature YA, 18-26) fiction as well as a full-time freelance journalist based in Chicago. I've contributed to the Chicago Tribune, Washington Post, Chicago Reader and many magazines as a journalist over the past 15 years. And like most New Adult fiction authors these days, I've gone the self-publishing route for my work since most publishers haven't caught up to the readership trends in this emerging shelf category. My writing is usually laced with humor and also often has sexual and/or dystopian elements.


GIVEAWAY!
-I have one (1) ecopy of Zombie, Incorporated to give away. To enter simply comment on this post with a way to contact you :) Giveaway ends July 8th!


There's also two fantastic tour wide giveaways going on, so feel free to check them out too!
a Rafflecopter giveaway

a Rafflecopter giveaway
Posted by Rachel at 12:00 AM