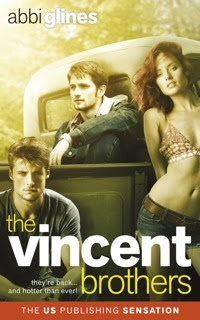 Lana has lived her life in her cousin’s shadow. Ashton always made perfect grades, had tons of friends, and looks model-perfect. And she’s always had Sawyer Vincent—the only boy Lana’s ever wanted—wrapped around her finger. But now things are different. Lana has a chance to make Sawyer see her, and she’s taking it. If only he’d get over Ashton—because Lana is sick of second-best.

Sawyer’s heart is broken. He’s lost his best girl to his best friend. And then Lana comes to town. Ashton’s cousin has always been sweet and soft-spoken, but now she’s drop-dead gorgeous as well. Sawyer doesn’t know if Lana can heal his broken heart, but spending time with her might at least make Ashton jealous.

What starts as a carefree fling becomes a lusty game of seduction. Sawyer and Lana may have different motives, but their scintillating hookups are the same kind of steamy. . .

The Vincent Brothers is Abbi Glines's sizzling follow up to The Vincent Boys and really is as deliciously addictive as the first book!

Honestly, I wasn't completely sure if this series would be for me before I read it. Considering I'm only just venturing into the NA genre, I thought this series may possibly go over my head....Boy, was I wrong! I've become quite a fan of this series.

Abbi Glines's writing is picturesque and seductive and just filled with fantastic, flawed individuals with great personalities and even better stories! The Vincent Brothers tells the story of Lana and Sawyer and after the conclusion of The Vincent Boys and the state it left Sawyer, I really have been looking forward to reading this book; to finally discover what lay in store for Sawyer.

And Abbi Glines sure didn't disappoint! From the opening chapter, The Vincent Brothers was a fantastic read. Taking us right into the beginning of Sawyer and Lana's passionate and often difficult relationship, this book had my attention the entire way through--really, I read it in a day. I was even sneak reading at work--something I don't often do!

I was really surprised by the personality shift in Sawyer in The Vincent Brothers. Gone was the nice, dependable Sawyer. In his place was a harder, alpha male; someone hurting and lashing out that those he cared about and acting very unlike himself. Someone still fighting to get over the betrayal he suffered at the hands of his best friend, and cousin/brother Beau and his girlfriend Ashton. Admittedly, I felt like Sawyer acted like a real jerk at times in this novel, but I have to praise Glines for the way she explored his character.

Sawyer suffered real pain when he was hurt by those he loved the most in the last book and I think Glines portrayed a really authentic realization of his actions in this one. They felt real and while I didn't agree with them on occasion, I could see why Sawyer lashed out as he did and I think this made it even more memorable and worth wild seeing him fall for Lana and slowly move on as he experienced real desire and emotion for the first time with another girl that wasn't Ash.

That being said, I think Lana really was the best match for Sawyer. Lana was a sweetie, but she was also very fragile in a way that helped Sawyer get in touch with the good guy that resided within him. I felt for Lana in this book I did. Her family was messed up and I thought it was sad that she had never really been first for anyone before. Seeing her come into her own, while making mistakes and making the wrong decisions was a nice experience.

Together, Lana and Sawyer really were perfect. Unlike with Beau in the previous book, Sawyer was actually inexperienced in the sex department and I enjoyed the way Glines delved into Lana and Sawyer's discovering of passion and lust for the first time. Lana was innocent, but she knew what she wanted [Sawyer] whereas Sawyer was unprepared to want Lana the way he did; yearning for her in an intense way he never had Ashton. I liked how Glines had them discover one another and grow from one another--it really was sweet.

Alright, I have to say it....the ending of this book was so cliche and sugary sweet that it really was absolutely perfect! Considering what these four individuals have been through over the course of two books, Abbi Glines couldn't have written the ending of this book any better. I really felt as those we had closure at the end of The Vincent Boys, in the best possible way, and although I'm very sad to see the series end, I'm very pleased with how it did none-the-less.

Rich in passion and romance and flaunting some yummy characters who will just captivate you from start to finish, The Vincent Boys is one NA series you do not want to miss!

Source: Sent for review by Hot Key Books (Thank you so much Sandra!)
Format: Paperback
Buy it: Booktopia | The Nile | The Book Depository | Amazon
My Recommendation: Fans of NA don't want to miss this series!
Cover: I LOVE this cover! Those Vincent Brothers....so sexy.
Will I read sequel/continue with series: This is the end of this series by Abbi Glines, but I definitely plan on reading more by her in the future.....