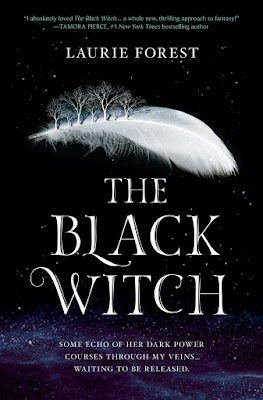 A new Black Witch will rise…her powers vast beyond imagining.

Elloren Gardner is the granddaughter of the last prophesied Black Witch, Carnissa Gardner, who drove back the enemy forces and saved the Gardnerian people during the Realm War. But while she is the absolute spitting image of her famous grandmother, Elloren is utterly devoid of power in a society that prizes magical ability above all else.

When she is granted the opportunity to pursue her lifelong dream of becoming an apothecary, Elloren joins her brothers at the prestigious Verpax University to embrace a destiny of her own, free from the shadow of her grandmother's legacy. But she soon realizes that the university, which admits all manner of people—including the fire-wielding, winged Icarals, the sworn enemies of all Gardnerians—is a treacherous place for the granddaughter of the Black Witch.

As evil looms on the horizon and the pressure to live up to her heritage builds, everything Elloren thought she knew will be challenged and torn away. Her best hope of survival may be among the most unlikely band of misfits…if only she can find the courage to trust those she's been taught to hate and fear.

The Black Witch is Laurie Forest’s debut novel and is an exciting new fantasy tale that launches a promising series and offers readers the opportunity to fall in love with a new world of danger, magic and unexpected alliances.

Elloren Gardener is the granddaughter of the last Black Witch, Carnissa Gardener who destroyed her people’s enemies and brought victory to the Gardnerian race during the Realm War. Every Gardnerian knows Carnissa’s name and as the splitting image of her late grandmother, Elloren lives in her infamous shadow. Raised alongside her brothers in isolation by her eccentric uncle, Elloren is nothing like Carnissa, for she has no magic at all. When a visit by her estranged aunt sees Elloren given the opportunity to pursue her dream of studying apothecary, Elloren travels to a renowned University to study alongside her brothers. Living amongst other races for the first time in her life, everything Elloren thought she knew about herself and her people slowly begins to unravel and with evil looming, will Elloren have the strength to do what’s right even at her own cost?

After a slow and turbulent beginning, I surprised myself by absolutely falling in love with The Black Witch. A large novel with 600 plus pages, the first 200 pages of The Black Witch were a real struggle for me as I couldn’t seem to connect or care much for the characters and story. From about that 200 page mark however the remainder of the novel absolutely flew by for me; and I thoroughly enjoyed what I read. Laurie Forest held me entranced by her world and especially many of the minor characters the heroine Elloren had the pleasure of meeting and interacting throughout the story.

The world within The Black Witch is very intricate with a lot of difference branches that bring it to life. The Gardnerian society make up a large part of what we see within The Black Witch but Laurie Forest also introduces her own version of shifters, fae, Amazon warriors, demon-like creatures, and selkies among others. Admittedly it is a lot to take in at times and it took me a while to become comfortable with such a vast array of races and characters, but eventually I came to love all the different groups and what they brought to the story.

The protagonist in The Black Witch Elloren begins the novel as a somewhat naïve individual, especially where the true nature and the true way of her people are concerned. At her heart she’s actually quite kind and soft so as The Black Witch progresses, Elloren begins to learn the truth about the world around her and has her eyes opened to the suffering and treatment of others. Watching Elloren take chances and do the right thing is really uplifting and honestly endears her to me.

I adored all the minor characters Laurie Forest introduces in this novel. Admittedly there are a lot of them and though you might be forgiven for thinking there is too many, each and every one seems to bring something new to the story. From Elloren’s brothers Rafe and Trystan, to Lupine’s Jarod and Diana, brooding and mysterious Yvan, fellow Gardnerian and sweetheart Ashlenn, Icarels Wynter and Ariel, Gypsie boy Andras and even Wynter’s Fae brothers….I loved them all, especially when they were interacting and working together; they all made such a fabulous team.

The Black Witch is also full of blossoming romances, both forbidden and endearing. As the novel progresses, Forest begins to pair off many of the characters. Not that I’m complaining as I really am a romantic at heart. Personally I really enjoyed seeing some of the relationships develop. I won’t give away any spoilers, but Diana’s comfortability in her own skin and self-assurance made me smile as did her unwavering determination to be with who she wanted. I also think there are the potential for more pairings—I don’t know why but I think Ariel and Andras would be an intriguing pairing with plenty of possibility. She’s crazy, but I think he could handle her nature better than anyone else.

There was honestly so much about The Black Witch that I ended up loving and I genuinely did not want to put the book down whilst reading. I’m still thinking about the story now, long after I’ve turned the final page. I will definitely be looking to read the next novel as soon as it is released! Can’t wait to see what Laurie Forest does next this this thrilling series with so much potential!

Source: Sent for review by publisher (Thank you Vanessa!)
Publisher: HarlequinTEEN
Format: Paperback
Australian RRP: $19.99
Release Date: June 2017
Purchase: Bookworld | Booktopia | The Book Depository | Amazon
Final Thoughts: After a shaky start, I ended up thoroughly enjoying this and am glad I persevered--can't wait until the sequel is released!