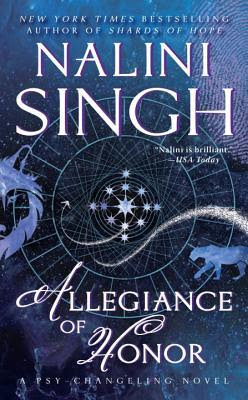 A staggering transformation has put the Psy, humans, and changelings at a crossroads. The Trinity Accord promises a new era of cooperation between disparate races and groups. It is a beacon of hope held together by many hands: old enemies, new allies, wary loners.

But a century of distrust and suspicion can't be so easily forgotten, and it threatens to shatter Trinity from within at any moment. As rival members vie for dominance, chaos and evil gather in the shadows and a kidnapped woman's cry for help washes up in San Francisco, while the Consortium turns its murderous gaze toward a child who is the embodiment of change, of love, of piercing hope: a child who is both Psy and changeling.

To find the lost and protect the vulnerable and to save Trinity no one can stand alone. This is a time of loyalty across divisions, of bonds woven into the heart and the soul, of heroes known and unknown standing back to back and holding the line. But is an allegiance of honor even possible with traitors lurking in their midst?

Allegiance of Honor is the fifteenth novel in the Psy-Changeling series and brings all our beloved characters together again in what is the beginning of a new story arc in the series and the start of many more possibilities.

After a bloody and dangerous battle between the remaining Psy council and those who dare to stand against them, Silence has fallen and in it's place is The Trinity Accord. Psy, Changing and Human have all come together in unity. It marks a new era of unity between the various groups that are determined to bring a about a new future for their people. However there are those who still oppose the fragile new connection and as radical groups rise up to tear it apart, those who are part of The Trinity Accord will have to be smarter than ever to ensure the ones they love are protected.

I have to admit it's amazing to see after fifteen novels how far the series has come. From Lucas and Sascha who were the very first to bridge the gap between races, Nalini Singh has continued to build her world and interwoven DarkRiver, ShadowDancer, Psy, Forgotten, Arrow, Human and all the various smaller groups and individuals so beautifully.

Psy-Changeling is without a doubt one of my favorite PNR series and I adore witnessing all the powerful bonds of family and friendship that give it life with every installment. Unlike all the previous installments, Allegiance of Honor doesn't focus around a new pairing, but rather allows us to revisit many of the previous beloved characters while highlighting how closely bonded they have become over the course of the series.

With Mercy and Riley about to have their pubcubs any day, the leopards and wolves are closer than ever as they prepare for the moment their two packs join like never before. The BlackSea pack proves an intriguing group as these water changelings play a larger role in the storyline than they previously have while Human Alliance leader Bowen Knight features in a few chapters too--setting up the beginning of his soon to come story.

Singh writes some beautiful, heartfelt moments between various pack mates and associates that will keep her readers very happy while also leaving them very excited the journey on with the next chapter in this thrilling series.

Source: I purchased from The Book Depository
Publisher: Berkley Books
Format: Paperback
Release Date: December 26th 2016
Purchase: Bookworld | Booktopia | The Book Depository | Amazon
Final Thoughts: I loved being able to revisit the previous characters I have loved and followed in the past; now I'm ready for brand new pairings and romances!