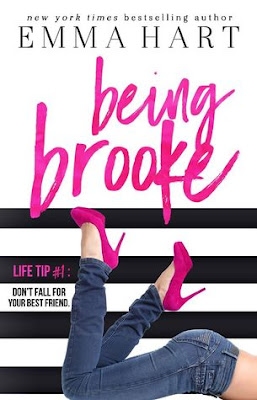 My name is Brooke Barker...

And I'm a freaking disaster.

No, seriously. I’m a college drop-out working a dead-end job, my best friend Carly’s dog gets more action than I do, and I have more bad dates in my diary than there are movie remakes.

Not to mention I'm completely and utterly in love with Cain Elliott.

The problem? He’s in a relationship. With a girl who’s so plastic she makes Barbie cry herself to sleep with jealousy.

And that’s all he can be, right?

(Being Brooke is a standalone romantic comedy. Hilarious, super-sexy, and possibly highly inappropriate at times, this is the perfect feel-good read!)

Being Brooke is the delightful first novel in Emma Hart's Barley Cross series and is a fun, flirty and at times laugh-out-loud hilarious romantic comedy that fans of Christina Lauren and Alice Clayton are sure to just adore.

Brooke Barker is twenty four and an absolute disaster. She's recently dropped out of collage, working at a dead-end job, is clumsy, hapless and living alone for the first time in her life when she can't even successfully boil water. Oh, and she's hopelessly in love with her best friend Cain who has a girlfriend from hell and who doesn't seem to return her feelings. Loving Cain for years hasn't gotten her anything but heartbreak, yet with Brooke unable to turn off her feelings, will she finally build up the courage to tell Cain how she feels? Or will he remain stuck in his toxic relationship forever?

Being Brooke was my first novel by Emma Hart and I have to say I was impressed. The story was fun and engaging (though not overly original) and the characters were very personable. This novel was light and carefree while also managing to be romantic and full of chemistry without being too heavy.

Main character Brooke was an absolute mess of an individual; something she herself acknowledges numerous times throughout the story, and although I'm hesitant to believe there's someone out there who could really be this hopeless, she's oddly endearing in her hapless kind of way. Brooke is geeky and down to earth; quite happy to lounge around in old sweatpants, eating pizza and watching Harry Potter rather than going out to parties and socializing. Basically my sister-from-another-mister.

I liked the other characters we met including Brooke's best friend Carly and Cain's brother Zeke who I know feature in the second novel. Cain seemed like the perfect boy-next-door, best-friend-turned-boyfriend and I loved both his and Brooke's eccentric families including Brooke's sex obsessed grandfather! Very entertaining.

Fun and very relaxing reading, Being Brooke was a great introduction to author Emma Hart who I'll definitely be on the look out to read more of in the near future, starting with book number two in this series, Catching Carly!