Book Shelf: On the Plus Side (A Perfect Fit #2) by Alison Bliss 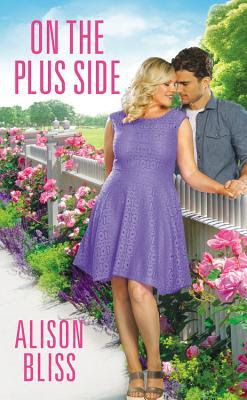 The second book in a laugh-out-loud new contemporary romance series from Alison Bliss!

Big girls don't cry. They go after what they want.

Thanks to her bangin' curves, Valerie Carmichael has always turned heads-with the exception of seriously sexy Logan Mathis. Just Valerie's luck that the object of her lust-filled affection is also best friends with her overprotective brother. But Valerie's determined to get Logan's attention . . . even if it means telling a teeny little lie to get a job at his new bar.

Logan can't remember a time when Valerie didn't secretly fuel all his hottest fantasies. Now the curvaceous she-devil is working behind his bar, tempting him every damn night. It's only when he finds Valerie's naughty things-to-do list that Logan decides to break every rule in the book-by making each red-hot deed a reality.

On the Plus Side is the second novel in Alison Bliss’s A Perfect Fit series and this time features the previously introduced character Valarie and the man she has secretly wanted for years.

Valarie Carmichael has always had feelings for her older brother Brett’s best friend. As a teenager, her crush seemed unreciprocated and unattainable, especially when the man in question left town without a word and has only just returned after eight years. Logan was the only man Valarie’s sexy curves and vibrant personality wasn’t able to win, but the years apart haven’t changed the way he makes her feel. Logan Mathis has returned to his hometown of Granite, Texas in the hopes of saving his mother’s home that is about to be foreclosed on. The plan is simple; open a bar and make enough money to get her out of trouble. He certainly wasn’t expecting Valarie to ignite a different kind of trouble in his life…..Logan has always forced himself to avoid acting on the raging attraction he feels for his best friends little sister, but Valarie isn’t a little girl anymore. Beautiful, mouthy and determined, Valarie makes him burn hotter than ever before. Getting involved with her may be a bad idea but as the two find themselves working together at Logan’s bar, they’re about to discover that neither can deny what simmers between them….

On the Plus Side is another fun and flirty contemporary romance from Alison Bliss. As with the first novel, On the Plus Side features likable characters, funny dialogue and plenty of sensual and saucy moments between the love interests that bring the romance to life. Unfolding in the varying POV’s of main characters Valarie and Logan, On the Plus Side offers readers a well-rounded story with plenty of entertaining moments.

Valarie was a confidant and capable young woman. I appreciated that Alison Bliss wrote her comfortable in her own skin and didn’t focus too much around what she weighted, unlike previous main character Leah who had a lot of insecurities where her weight was concerned. Logan too was a solid male lead and I thought he and Valarie were sexy and thrilling together.

A solid read from beginning to end, On the Plus Side was another enjoyable contemporary romance. I’m hoping we have a chance to see Valarie’s brother Brett feature in a story down the track and am looking forward to seeing Max star in the next instalment!