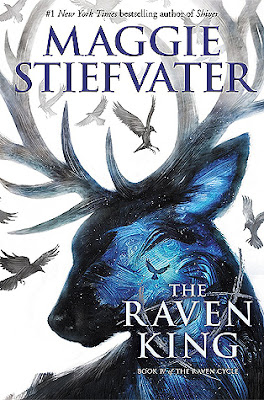 The fourth and final installment in the spellbinding series from the irrepressible, #1 New York Times bestselling author Maggie Stiefvater.

All her life, Blue has been warned that she will cause her true love's death. She doesn't believe in true love and never thought this would be a problem, but as her life becomes caught up in the strange and sinister world of the Raven Boys, she's not so sure anymore.

The Raven King is the fourth and final novel in Maggie Stiefvater’s Raven Cycle series and is a vividly told ending to a magical and whimsical series full of wonder and adventure!

All her life Blue Sargent has known that her true love would die if she ever kissed him. Her curse has never been a problem as Blue has never believed in love, but since becoming friends with Gansey, Ronan, Adam and Noah it’s become impossible not to believe in impossible things. Now Blue and the Raven Boys find themselves nearing the end of their search for a slumbering Welsh king and with strange and deadly things starting to happen in their town of Henrietta, the end by come sooner than any of them think…..

Maggie Stiefvater has always been one of my favourite authors; ever since I read her debut novel, Lament: A Faerie Queen’s Deception. Her imaginings never fail to win my heart, but I truly do believe The Raven Cycle has been the most unique and vivid creation of hers yet. Before the first novel, ley lines were something I had never heard of and now I feel like I know them and their reasoning’s better than I ever expected.

Throughout the series I’ve constantly enjoyed being swept up into tales of magic, dreams and premonitions and The Raven King is no exception, ending the series in spectacular fashion. This instalment is whimsical and full of incredible things but also dangerous and deadly with no one guaranteed to make it out alive.

I’ve loved following Blue and the boys throughout the series and seeing the story unfold in third person has always allowed for a very well rounded reading experience. I love being able to see what is going on with Ronan and then follow Blue or Gansey for a chapter. Even some of the smaller roles; Grey Man, Piper and others have helped enhance all that is going on throughout the story.

Stiefvater has created such a unique and different cast of characters within this series and I’ve loved following them all. Gansey, Ronan and Adam have a strong friendship and Blue brings more life to their dynamic. Even Henry manages to become a more focal part of the story and wins himself a place within Gansey’s group of merry men. There’s wonderful romance between Blue and Gansey who have fought the inevitable but ultimately can’t deny now they feel…..and Ronan and Adam! Totally didn’t see that coming but loved it none-the-less!

The stakes have never been higher than they have in The Raven King. Our beloved characters will have to make some tough choices and as always, Maggie Stiefvater keeps you guessing until the very end. Beautifully represented and lyrical, The Raven King is a thrilling final novel and leaves the series at a perfect place.