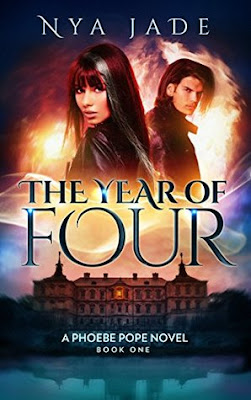 The students of Green Lane Academy roam their halls unaware that below their manicured campus exists a prestigious school of an entirely different kind . . .

Sixteen-year-old Phoebe Pope has enrolled at the Campus Below: a spy academy for shape-shifters hidden deep beneath the grounds of a boarding school whose humans unknowingly protect it. There, thanks to a carefully planned schedule, she leads a double life: spy trainee Below and normal teenager Above.

As if two course loads, concealing a secret power she alone wields, and coping with her father’s recent death weren’t enough, Phoebe finds herself developing major feelings for actor and teen heartthrob Colten Chase, who attends the Campus Above and appears to be majoring in winning Phoebe’s heart. But when officials learn that Phoebe may be at the center of a startling prophecy, she becomes the target of shape-shifting assassins who will stop at nothing to suppress the truth.

Now Phoebe’s lessons about Shaper’s enemies and spycraft take on great importance as a menace stalks the campus, with Phoebe as its target. Meanwhile, what began as an unlikely relationship with Colten, quickly morphs into heartache when she suspects that something sinister lurks beneath this movie star’s glitter and fame. Suddenly, Phoebe’s caught in a mesh of lies, betrayals, and danger where she doesn’t know who to trust, and needs to rely on herself—and her secret power—to get to the truth and to stay alive.

The Year of Four is Nya Jade’s debut novel and the first novel in her Phoebe Pope series and is a fun and engaging shifter tale that is a mix of Vampire Academy by Richelle Mead and Mythos Academy by Jennifer Estep---perfect for those who love their supernatural action charged, dangerous and romantic.

Sixteen year old Phoebe Pope has just enrolled in an elite underground school for shapeshifters. Located under a prestigious boarding school called Green Lane Academy, Campus Below offers their supernatural students classes that will help them become the ultimate Shaper agents, while the human’s presences in the Campus Above unknowingly helps keep them hidden. Keeping a dual schedule as both a student in the human Campus Above and Shaper Campus Below, Phoebe must deal with her intense course load as well as a secret ability she alone wields. Add in the grief from her father’s recent death and the interest she’s been receiving from Colten Chase, Hollywood’s most up and coming young actor who is attending Green Lane Academy and Phoebe’s balancing a lot. Then students from Campus Below start disappearing and suddenly it becomes clear that there are a lot more dangers out there than first thought and surprisingly they may be closer to home than anyone imagined…..

I was really impressed with The Year of Four. Kicking off the story from the opening chapter spectacularly, author Nya Jade has created a vivid and appealing shifter world and draws her readers into an enticing and exciting storyline. Jade depicts a very detailed and complex society of shifters with intriguing hierarchy in The Year of Four. It’s very clear that a lot of thought and effort has gone into the imagining of this world. I think we’ve only seen the tip of the iceberg and I’m looking forward to exploring more of it in future books.

The world of teen schooling will appeal to those who love campus/boarding school tales as Campus Above and Campus Below are both very interesting with their own purposes. I liked how Nya Jade mixed the two together with human and supernatural worlds colliding often throughout the story. There’s a great cast of characters littering both campuses including both students and professors. Not everyone is as they seem and I enjoyed some of the surprises that came my way—some I weren’t expecting at all.

Phoebe is a strong and personable heroine to follow. She has a lot of potential to be a stellar main character and I anticipate a lot from her in the future; both in her growth and her abilities. Her best friend Hayley was someone I also loved, as well as Colten Chase who was very much the swoon-worthy male lead—he and Phoebe have a great dynamic and I liked how Jade developed their romance; it seemed endearing and passionate at the same time.

The Year of Four offers readers a great reading experience and introduces them to an addictive new paranormal series. Nya Jade details something a bit different and throws a great bunch of developments into the story to keep readers on their toes. I’m super excited to jump into the next novel straight away and join Phoebe Pope once again in what is I’m sure another thrilling tale!

Source: Sent for review by Dog Eared Publicity and the author (Thank you guys!)
Publisher: Dreamwell
Format: Kindle ebook
Release Date: February 2017
Purchase: The Book Depository | Amazon | Barnes & Noble
Final Thoughts: I was delightfully impressed with this novel and can't wait to begin the second one!