Welcome to the Book Blitz for Just Three Dates by David Burnett thanks to Xpresso Book Tours! Personally I think this book founds really fun and romantic and am excited to be showcasing it today :) I actually hope to have an opportunity to read it myself in the future. 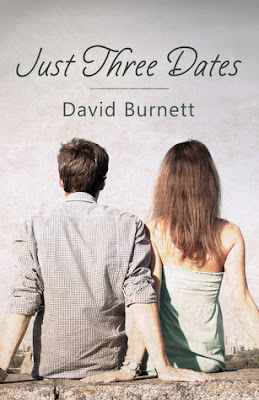 Should you only marry for love?

Since breaking with her last boyfriend, Karen has refused to trust any man her age. For the past three years, she has not dated the same one twice, and only one in ten has received even a goodnight kiss as she turned him away. Karen is an artist. She follows her feelings, lives in a cluttered loft, and gushes over vivid sunsets.

Mark still dreams about his almost-fiancée, and his date book has been empty since he threw her out a week before he’d planned to ask for her hand. His friends call him the “Ice Man,” since he seldom smiles, especially at a woman. A math professor at the College, logic guides his behavior, he loves order, and an elegant proof is a thing of beauty.

Both Karen and Mark have all but abandoned hope of ever falling in love, and, left on their own, these opposites would never attract. So, their mothers become matchmakers, entangling them in a series of dates, extracting promises that they will go out together three times, suggesting that, in the absence of love, a “marriage of convenience” is a live option.

If you like heartwarming stories based on true-to-life behaviors, with complicated relationships and a less-than-certain outcome, you will enjoy Just Three Dates!

“You need a husband.”

A week and a half had passed since her lunch at the Grill. Wrapped in a beach towel, Karen sat under the awning on the patio behind her parents’ house, a few chips, a bite of hamburger, and the remainder of her Coke on the table beside her, the cool water in the pool tempting her to take another plunge. Her mother sat on the other side of the table, a glass of red wine standing beside the remains of her meal.

“Mother, we’ve talked about this before and—”

“Stop.” Her mother held up her hand. “This afternoon, I’m the one who is going to talk, and you are going to listen.”

Karen opened her mouth to begin her litany of objections, but changed her mind. She felt weary of arguing. She folded her hands, glared at her mother, and waited.

Her mother leaned forward, resting one arm on the table. “You are twenty-five years old, and you need to have some concern about your future.”

“You’re supposed to let me talk.”

“You are twenty-five years old, you’re a college graduate, and you have a good job.” Margaret nodded. “One that makes it possible for you to have a four-room apartment above an attorney’s office on King Street.” She paused, watching as Karen bit her lower lip.

“I love my apartment and the location is terrific.”

Karen shut her mouth firmly and made a show of pretending to insert a key and turning it to lock her mouth closed, a gesture from her childhood. Karen had always been “rather verbal,” as one of her teachers had put it.

Her mother chuckled at the gesture. “Your apartment really is quite pretty. You’ve decorated it nicely, and it is very close to the museum, but, sweetheart, it’s not how you are accustomed to living. Your friends trip over each other as they walk from the living room to the kitchen. You have no space for even a small table, so you eat at the bar.

“You have very basic insurance. You have no savings, you’ve never taken a vacation, and when your car departed this life last year, I bought you a new one.”

“You insisted on buying it. I would have found—” Karen pinched her lips shut, finding it virtually impossible not to jump into the conversation.

“A used car that was little better than the one that you last saw behind a tow truck. My point is, sweetie, you are just getting by and—”

“Do you know how many people would love to have my salary and my apartment? My life?”

“So I need a husband to bail me out? I need an additional income stream as Dad would put it?” Karen sat back, her arms crossed over her chest.

Her mother laughed. “Your daddy phrased it exactly that way.”

“Daddy agrees with you?” It was beyond belief.

“Look, sweetheart, you’re an artist, and a very good one. I knew you would love to paint when I saw the expression on your face the first time you picked up a brush. Critics rave about your work and buyers snap up every piece that you are willing to sell. I’m thrilled you enjoy
your work at the museum. I would hate it if you ever needed to leave your job or to put away your brushes, but your salary and your sales simply do not provide enough for the life you want, the one you deserve.” Her mother sipped her wine and shifted her position, leaning back, matching Karen’s posture.

“If you would produce prints of your paintings, prints with mass appeal, there might be no problem, but you won’t. If you had fallen in love with medicine, with law, with finance even, money might not be an issue, but you didn’t.”

“You need a husband to provide for you.”

“But if I don’t love him…” Karen held out her hands, appealing to her for support.

“Love is absolutely wonderful, sweetie, but it doesn’t pay the bills.”

Karen glared at her, but her mother continued.

“I’m talking, remember? Or trying to.” Her mother smiled. Karen sighed and nodded.

“You’re lonely. I know you have friends. Kimi, Vicky, and Pam are all good friends, but Vicky and Pam are married—Pam just recently, but still. Emily Stuart is getting married next spring. You sit at home by yourself. You go to parties by yourself.”

“Who is taking you to the gala when your Monet exhibit opens in two weeks?”

Karen dropped her eyes, staring at the table.

“You. Need. A. Husband.” Her mother drew out the sentence, emphasizing each word.

Karen looked up, her eyes narrowed. “So you have a plan.”

“I do.” Her mother smiled as she nodded. “Speaking of the Stuarts…Remember last week, when we had lunch at the Grill? With Elizabeth Stuart.”

Karen nodded. She’d felt as if Ms. Stuart was grilling her.

“You know her daughter, Emily, but she also has a son.”

“Take me now,” Karen whispered, closing her eyes and bowing her head as if in prayer.

“…and he has agreed to go out with you.”

David Burnett lives near Charleston, South Carolina, where he walks on the beach almost every day and photographs the ocean, the sea birds, and the marshes that he loves. Three of his four books are set in Charleston, and he has always enjoyed the Carolina beaches.

David enjoys photography and has photographed subjects as varied as prehistoric ruins on the islands of Scotland, star trails, sea gulls, and a Native American powwow. He and his wife have traveled widely in the United States and the United Kingdom. During trips to Scotland, they visited Crathes Castle, the ancestral home of the Burnett family near Aberdeen, and Kismul Castle on the Isle of Barra, the home of his McNeil ancestors.

He reports that he went to school for much longer than he wants to admit, and he has graduate degrees in psychology and education. He and his wife have two children and a blue-eyed cat named Bonnie.