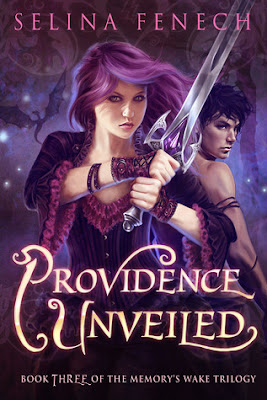 A wicked plot dating back to the very beginning of Avall is coming to its end, and Memory is a vital part. In order to save her friends, Memory will break all the rules. With all worlds put at risk by her actions, she will have to step up and make the greatest sacrifice to repair Avall and make the world something better than before.

Providence Unveiled is the thrilling conclusion to the Memory’s Wake Trilogy by Selina Fenech and is an addictive, romantic, action packed and at times heart-warming end to what has been a beautiful series to read!

Since waking up in Avall with no recollection of who she was, a lot has changed for Memory. She’s found her sister, discovered who she is and is now the Queen of Avall. But that doesn’t mean the danger Memory and her friends have faced is over; far from it…..There’s a darkness brewing in Avall and with the human, fae and Avall worlds all at risk, Memory and her friends must find a way to protect the ones they love from a enemy that’s been planning it’s attack for decades. With Eloryn, Roen and Will standing by her side, Memory knows she can do everything, but when they themselves are threated, will Memory be able to save them? Or will she need to make the biggest sacrifice a person can make to save them?

Having devoured the Memory Wake’s Trilogy one book after the other, I’m a little sad to see the series come to an end, but I was really satisfied with how Selina Fenech ended it. Providence Unveiled is another beautifully told story, this time taking us into the heart of the lands the fae call home as Memory attempts to rescue someone she loves from the clutches of an enemy---allowing Fenech to truly explore the home of the fae for the first time in this series with wonderful effect. Harsh and barren, this dying land was really intriguing—and I really liked discovering and getting to know the Seelie and Unseelie courts a bit more.

There’s a lot going on in this third and final book; a lot of entertaining moments, sweet moments and of course sad ones as not every character we’ve met along the way is guaranteed to survive the growing discord and war between Avall and the fae. I’ve really enjoyed following Memory, Eloryn, Roen and Will throughout the trilogy and have loved seeing them all develop and grow, especially Memory who has come the furthest over the course of the three books.

It’s been a wonderful reading experience getting lost in this light and magical fantasy world. Selina Fenech delightfully explored the bonds of friendship, family and love and mixed so much magic and adventure into the series. Highly entertaining and luscious, Providence Unveiled brilliantly concludes this trilogy that I highly recommend.

Source: I purchased from Amazon
Publisher: Fairies and Fantasy Pty Ltd
Format: Kindle ecopy
Release Date: January 19th 2015
Purchase: Bookworld | The Book Depository | Amazon | Barnes & Noble | Kobo
Final Thoughts: I truly did adore this series. I thought the storyline was entertaining and the pictures such a beautiful addition to a brilliant story.