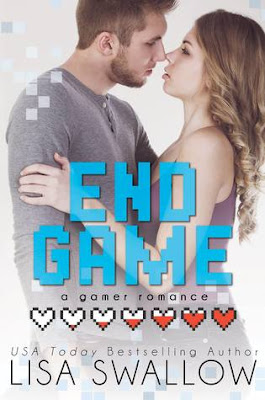 He’s my knight in shining armour, but not the romantic kind a girl dreams about. This one invaded my online world and threw everything into chaos.

My sorcerer can kick his ass in the game, but real life kicks mine. Gaining experience points online is easier than in reality, and when I play, I know where my quests lead. In the real world, the storylines confuse me, and I don’t know which direction I’m heading in.

In the game, I’m in control.

Or I was until he arrived.

This guy never shares anything about himself, and I only know him as 'Thorsday'. My Aussie gaming nemesis can't be a blond haired, blue-eyed god in reality.

There’s something about this enigmatic man that intrigues me, and the more we play together, the bigger my desire to meet him. And I know he feels the same.

The problem is, if I allow my game world to merge with reality, I could die standing in the fire.

End Game is Lisa Swallow’s latest release and is a fun and adorable NA perfect for those who like their romances with a cheeky spark and geeky aura.

Twenty-one year old Evie loves to get lost amongst her favourite online game of sorcerers, mages and monsters. Every quest and level-up is exciting and keeps her from thinking about her day to day reality which consists of a dead-end job and no plans for the future. Until a new player joins her guild and changes everything….Aaron is arrogant, cocky and his online avatar “Thorsday” is way too good for Evie’s liking. Add to the fact Aaron’s voice is shiver-inducing and Evie finds herself wondering what the often infuriating player from the other side of the country is like in real life. When the opportunity arises for the two of them to finally meet, Aaron and Evie can’t deny the attraction that simmers between them, but with distance and Aaron’s determination to keep his secrets to himself threatening their budding romance, will Evie manage to snag her knight in shining armour? Or is she destined for nothing but heartache?

I have to admit this is my first novel by Lisa Swallow I’ve read but it definitely won’t be the last. Fun and light, End Game was a flirty and endearing novel that appealed to the geek in me. As a lover of sci-fi and fantasy myself, I could emphasise with Evie and her friends and their love for Comic-Cons and nerd-like things. I’m a fair geek myself—and though I’ve never played an online game personally, I’m in attendance at every Comic-Con or Supanova in Sydney, so I could completely envision the well depicted and explained events Swallow included in End Game.

Evie was a down to earth heroine and easy to follow. She had a quirky personality and a defiant flair. As someone with somewhat similar likes to Evie, I enjoyed seeing her fan-girl over the latest pop-culture fads and elements out there. Evie and even the whole story was very relevant to me as someone who enjoys this stuff too. I felt like I was reading a story about a friend; someone with similar likes and tastes, and this made for easy empathy.

Lisa Swallow gives Evie a love interest in the form of Aaron, a “Mr Hemsworth” look-alike. I liked he was cheeky in his own right and complimented Evie. Aaron is very much a mystery outside of the game for the majority of End Game—just the way he likes it—until things force him to confront and admit to Evie his past. Personally I felt bad for Aaron and all he had gone through, but couldn’t deny that his inability to explain was the cause of most of the angst between him and Evie.

Filled with unique and quirky characters as Evie’s friends, Lisa Swallow leaves me interested to see if she turns this tale into a part of a series and explores some of the other characters we met. I’d love to see Tyler and Erin and Cole have their own tales—they were great to read about.

An enjoyable and easy to read novel, End Game was entertaining and leaves me interested to see what Lisa Swallow releases next!