Book Shelf: Union of Sin (The Vault #2) by Eden Summers 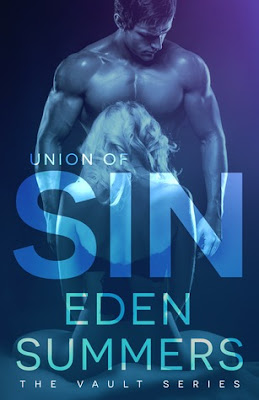 He’ll do anything to protect her. Even if it means letting her go.

Tate Jackson made a big mistake. No, a monumental one. He picked the wrong place to introduce his wife, Cassie, to the alluring lifestyle they’d fantasized about.
Instinct told him to get her out of the poor excuse for a sex club—but he didn’t. And she was assaulted because of his carelessness. He’ll do anything to protect her from another traumatic experience, even if it means making the agonizing choice to convince his wife he no longer loves her.
Cassie’s not buying it. In fact, Tate is the last person she blames for that horrific night. She’s willing to give him the space he thinks he needs to get his head straight, but when divorce papers arrive, she realizes she’s out of time. She has twenty-eight days to figure out why Tate is ruining a perfect marriage. Twenty-eight days to figure out what he’s hiding. But when she learns the truth, she has to decide if her heart can take the strain of piecing their love back together.

Warning: Dirty tactics, dirtier sex, ropes, masks, guilty consciences, and love stretched so far, no one escapes unchanged. Not even you, dear reader.


Union of Sin is the second novel in The Vault series by Eden Summers and is another deeply sensual and sexy tale of romance, sensuality and passion.

Tate Jackson and his wife Cassie had the perfect marriage, full of love, devotion and passion until one fateful experience ended in a mistake that left T.J. riddled with guilt. Unable to continue to living with lies, T.J. moved from their home and began the process of letting his wife move on. Cassie knows she loves T.J. more than anything in life, and he her, so devastation doesn’t even begin to describe the feeling she experiences when T.J. serves her divorce papers. Heartbroken and confused, Cassie decides to make one last ditch attempt to save her marriage, but with T.J. determined to protect her, even at the cost of both their hearts, can Cassie convince T.J. to give them another chance? Or will they both be left broken hearted by pride and guilt?

As another quick and addictive read, Union of Sin is a salacious tale full of enticement and passion that will thrill readers looking for something sinfully naughty but with a great story line. Delving back into the world she introduced in A Shot of Sin, Eden Summers this time allows readers to get to know T.J. and his wife Cassie, two individuals whose love and lust for each other know no bounds but who will have to face some important decisions where their marriage is concerned.

Union of Sin was well written and sexy as hell. I’m thrilled to be able to follow Leo, T.J. and Brute in this series and have so far very much enjoyed both Leo and now T.J.’s tales. T.J. and Cassie were both great characters to read about with T.J. heavily laden with guilt and Cassie a woman on a mission; determined to save her marriage.

It’s pretty clear from the opening chapter of Union of Sin that T.J. and Cassie adore each other. The love they have for one another is never in question; it’s everything else they have to face that Eden Summers deliciously explores. Longing and desire are fundamental in this novel as Cassie and T.J. go to great lengths for the one they love. Both characters must face some harsh truths, T.J. especially as he has to come to grips with the choices he’s chose and possibly the mistakes he unnecessarily made.

Union of Sin is another sinfully delicious tale and with a perfect ending, leaves me dying to see what Eden Summers has in store for the remaining member of The Vault trio Brute. I have no doubt his tale will be a scorcher—can’t wait!