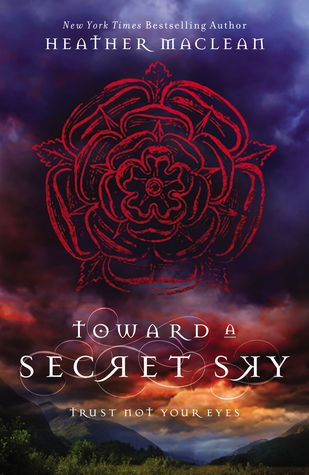 Toward a Secret Sky by Heather Maclean
Releases on: April 4th 2017
Add on Goodreads!

Toward a Secret Sky by New York Times bestselling author Heather Maclean is a new breed of YA novel: an intelligent adventure-quest crossed with a sweeping, forbidden love story. A mix of reality and possibility, this fast-paced thriller will appeal to fans of Stephenie Meyer and Dan Brown as it leads the reader on a breathless flight through the highlands of Scotland, the secret city under London, and history itself.

Shortly after 17-year-old Maren Hamilton is orphaned and sent to live with grandparents she’s never met in Scotland, she receives an encrypted journal from her dead mother that makes her and everyone around her a target. It confirms that her parents were employed by a secret, international organization that’s now intent on recruiting her. As Maren works to unravel the clues left behind by her mother, a murderous madness sweeps through the local population, terrorizing her small town. Maren must decide if she’ll continue her parents’ fight or stay behind to save her friends.

With the help of Gavin, an otherworldly mercenary she’s not supposed to fall in love with, and Graham, a charming aristocrat who is entranced with her, Maren races against the clock and around the country from palatial estates with twisted labyrinths to famous cathedrals with booby-trapped subterranean crypts to stay ahead of the enemy and find a cure. Along the way, she discovers the great truth of love: that laying down your life for another isn’t as hard as watching them sacrifice everything for you.


Thoughts:
Gimme. Gimme. Gimme! I WANT this book, like stat! Having read the description, everything about this book screams that it's got to be brilliant. Makes me think of The Da Vinci Code with a YA twist mixed with romance and adventure. I neeeeed Toward a Secret Sky and will be keeping an eye out for it in April!


What do you think of Toward a Secret? Is it something you want to read?
And what are YOU waiting on this week?