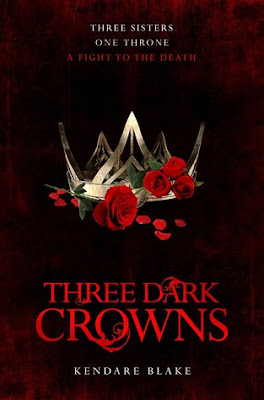 Three sisters. One crown. A fight to the death.

In every generation on the island of Fennbirn, a set of triplets is born: three queens, all equal heirs to the crown and each possessor of a coveted magic. Mirabella is a fierce elemental, able to spark hungry flames or vicious storms at the snap of her fingers. Katharine is a poisoner, one who can ingest the deadliest poisons without so much as a stomachache. Arsinoe, a naturalist, is said to have the ability to bloom the reddest rose and control the fiercest of lions.

But becoming the Queen Crowned isn't solely a matter of royal birth. Each sister has to fight for it. And it's not just a game of win or lose . . . it's life or death. The night the sisters turn sixteen, the battle begins.

The last queen standing gets the crown.

Three Dark Crowns is Kendare Blake’s latest release and is perfect for fans of Throne of Glass by Sarah J. Maas. Three Dark Crowns is a deeply dangerous tale of magic, danger and shocking betrayals. Loyalties change, alliances form and the story just gets better with the turn of every page.

Three Dark Crowns introduces readers to a darkly dangerous fantasy world where every generation three sisters are born, given the title of Queen and expected to one day assassinate each other until only one Queen is left standing to be crowned. Kept apart and trained in three different ways, there is the Poison Queen whose affinity for poisons is expected to be unsurpassable, the cold natured Elemental Queen who has control over the elements; earth, water, fire and air and the Naturalist Queen who alongside her animal familiar is expected to have an affinity over nature.

For sisters Katharine, Mirabella and Arsinoe this is their lives, but all three sisters are not who they have been trained to be; Katharine is unable to ingest even the smallest amount of poison before she sickens, Mirabella for all her powers breaks at the thought of hurting her sisters and Arsinoe cannot call upon her familiar or connect with the world around her. As the battle for the crown begins, loyalties are tested, alliances formed and betrayals emerge. All three sisters want to win, but when winning means the death of the other two how will one sister out maneuver the rest?

Told in the third person and following numerous characters, Three Dark Crowns focuses primarily around Katharine, Arsinoe, Mirabella and Arsinoe’s best friend Jules and was actually a really good read. I’ve heard mixed things about this book and though it was my first novel by Kendare Blake, I found Three Dark Crowns to be a very dramatic and eventful read. Three Dark Crowns was well written and the fantasy world alluring; even if at times I struggled to keep up with the multitude of characters and their motivations.

I’ll admit that at times the drama seemed to come on strong and one development in the story didn’t sit well with me--an act of infidelity occurs where one character claims to be hopelessly in love with another but sleeps with and then repeatedly seeks out a second girl. I wanted to see the first couple remain in love; not enter into a love triangle with a third person! There’s nothing I dislike more than cheating; seeing this in a story always impacts heavily on my opinion of the story. That being said, Three Dark Crowns made it really hard to dwell on this as Blake keeps the stakes high and the intense and creepy storyline progressing splendidly.

Considering we follow three main characters whose purpose in life involves killing each other, I went into the novel expecting to find myself on the side of one Queen over the other two, but instead Kendare Blake made me fall in love with each of the sisters. I’m invested in all three and their journeys and hate the thought of them having to hurt each other. I liked them all as individuals and enjoyed seeing their strengths and weaknesses come to light.

In some sense reading Three Dark Crowns is like watching a Game of Thrones episode—betrayals are just around the corner, you find you question everyone and their motives and you never know what will happen next. Blake weaves some lovely romance into the story and then twists and turns it around until you’re not sure who’s in love with who and who’s loyal—which makes for some very enticing reading.

Though I’ve been surprised by the amount of low reviews this novel has garnered, I really enjoyed it and can’t wait for more! The ending of Three Dark Crowns was extremely fast paced and Kendare Blake leaves you at a cliffhanger that will have you wanting to know exactly what happens next. Bring on the next instalment!

Source: Sent for review by publisher via Netgalley (Thank you guys!)
Publisher: Pan Macmillan
Format: Kindle ebook via Netgalley
Australian RRP: $16.99
Release Date: September 22nd 2016
Purchase: Bookworld | Booktopia | The Book Depository | Amazon
Final Thoughts: I really enjoyed this novel--more than I thought I would, and I'm looking forward to the next installment!