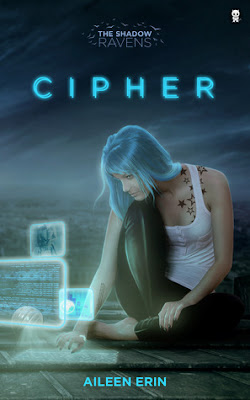 Alone and on the run, Cipher doesn't talk about her secrets, her powers, or the people chasing her. She can’t let anyone get that close. At least, she shouldn’t.

Knight is working undercover for the bad guys. He’s done things that have marked his soul, but it’ll all be worth it if he can save the girl who means everything to him—the girl who saved his life by putting herself in danger. It’s been twelve years, but Knight knows she’s still alive, and he’s made it his mission to find her and keep her safe.

When Knight finally catches up to Cipher, electricity sparks. He’s crazy gorgeous, stupid brilliant, and begging to lift the burden from Cipher’s shoulders. Can she really trust him with her secrets? With her life?

She doesn’t have long to decide, because Knight isn’t the only who’s been looking for her. Now Cipher can’t run without leaving him behind. What good is being together if they’re both dead?

To save Knight, Cipher will finally stop running…one way or another.

Cipher by Aileen Erin is the first novel in The Shadow Raven’s series and is an absolutely brilliant start to what looks like a highly promising YA series that features a fast paced storyline, wonderful dialogue and delicious chemistry between its two main characters.

In a world where she would be studied and experimented on for her abilities, Cipher has been alone and on the run for most of her life. Only managing to remain ahead of the authorities by the skin of her teeth, Cipher’s world changes when she meets the intelligent, alluring and at times infuriating, Knight. Knight has spent twelve years looking for the girl whose electric touch saved his life as a child, and now that he’s found her he has no intention of letting her go. Everything in Knight’s life has been in preparation of helping the girl he loves, but none of the training, secret missions or undercover work could have prepared him for the connection he feels when he meets Cipher, or the desire he has to keep her safe. With enemies hot on their trail and closing in with every second, Cipher will have no choice but to trust Knight if she has any hopes of surviving…..

I have no hesitations in saying that I absolutely loved Cipher! From the moment I began the story, author Aileen Erin had me addicted to the fantastic tale she had spun, eager to see Cipher and Knight’s story develop and their lives intertwine once more. Alternately told through Cipher and Knight’s points of view, Cipher is one of those YA paranormal/fantasy tales you can’t help but love and be swept into. Everything about it seems to be perfect; the pace, the characters, the romance, the storyline, the world—it all just works.

I know that the novels in this series will be told by different authors and the second book introduces a new heroine, but I look forward to seeing more of Cipher down the track too. Cipher was a well written, easily likable and intelligent character. I loved that Aileen Erin made her a gamer and a hacker—taking her outside the typical heroine mold and giving her a bit of nerdy-sass. Made me love her even more.

And Knight! Oh Knight. What a wonderful male lead and love interest! Knight was cheeky and smart and very capable. His training and capabilities had left a stain on his soul considering what he had been forced to do, but I love seeing how dedicated he was to Cipher and the Red’s and helping those who were being taken. Basically Knight just encompasses so much of what I love in male leads.

Unfolding through both POV’s meant we got a really well rounded tale that let us see what both Cipher and Knight thought and felt. They had such a lovely chemistry as characters and I have to give Erin props for how she wrote their relationship. Giving them a history—one that never really ended—meant that seeing them connect again was more satisfying.

Definitely impressing me, Cipher is a well written and electric (pun totally included!) tale that will no doubt leave you raring to see more of this delightful and engaging world as Aileen Erin kicks off The Shadow Raven series—can’t wait to see how Lola Dodge follows it up with her tale Quanta!

Source: I snagged this one for FREE on Amazon
Publisher: Ink Monster, LLC
Format: Kindle ebook
Release Date: October 31st 2014
Purchase: The Book Depository | Amazon | Barnes & Noble | Kobo
Final Thoughts: This book really impressed me and I may be late to start the series, but I can't wait to read the rest of the books released!