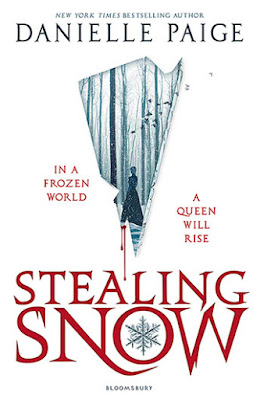 Seventeen-year-old Snow lives within the walls of the Whittaker Institute, a high security mental hospital in upstate New York. Deep down, she knows she doesn't belong there, but she has no memory of life outside, except for the strangest dreams. And then a mysterious, handsome man, an orderly in the hospital, opens a door – and Snow knows that she has to leave …


She finds herself in icy Algid, her true home, with witches, thieves, and a strangely alluring boy named Kai. As secret after secret is revealed, Snow discovers that she is on the run from a royal lineage she's destined to inherit, a father more powerful and ruthless than she could have imagined, and choices of the heart that could change everything. Heroine or villain, queen or broken girl, frozen heart or true love, Snow must choose her fate …

A wonderfully icy fantastical romance, with a strong heroine choosing her own destiny, Danielle Paige's irresistibly page-turning Snow Queen is like Maleficent and Frozen all grown up.
More info on Goodreads.....

Stealing Snow by Danielle Paige is a magical twist on the timeless fairy-tale The Snow Queen that introduces readers to an icy world full of secrets, danger and unexpected betrayals.

Seventeen year old Snow has spent the majority of her life in the Whittaker Institute, a secure mental hospital in New York City after an accident involving a mirror left her scarred and labelled unstable. Though Snow struggles to remember her life before Whittaker, she knows she doesn’t belong there, and when someone she loves is pulled quite literally through a mirror, Snow decides to join the mysterious boy who has been visiting her and haunting her dreams to journey to the icy world of Algid. In the land of Algid, a world of witches, thieves and magic, Snow begins to learn the truth about who she is and the ice that runs through her veins.

Stealing Snow is a really hard book for me to review; mainly because I was really looking forward to it and I feel it had so much potential. I know Danielle Paige has had success with her Dorothy Must Die series, but I really wasn’t feeling Stealing Snow. The concept had potential—I do so love The Snow Queen--and I really enjoyed discovering the land of Algid, but I just felt really dissatisfied with this novel.

Though for the most part Snow was easy enough to follow, I found it hard to connect with her. And all the characters really. I honestly think Snow has potential as an individual, so I am genuinely intrigued to see how she grows with the series. As for the other characters….I felt like there was just something missing. Paige has created this really vivid, icy world that’s full of snow, magic and possibilities, but I don’t think the characters did it justice. I’m hoping to connect more in the future.

The romantic aspect of Stealing Snow was a real disappointment for me. I was expecting a really lovely romance to accompany the story, but I disliked the fact that Snow had not one, not two, but three possible love interests that she seemed to care about and want in varying degrees. Supposedly she’s in love with one, but she is attracted to, desires slightly and gets jealous over two more?? Not buying it. Although so far if I have to choose, I’m team Kai!

The overall feel of Stealing Snow reminded me of Julie Kagawa’s Iron Fey series—that aura of magic and endless possibilities. Though I had my issues with the novel, I am intrigued by Paige’s world and was really impressed by the last few chapters of the novel, especially the ending. There was a lot of unexpected twists and revelations that make me wonder what Danielle Paige plans for the rest of her series.

Failing to win me over like I'd hoped, Stealing Snow could have soared, but ultimately didn’t. I may be persuaded to read the sequel when it comes out however, simply to see what happens next and whether there will be any redemption for the series in my eyes.

Source: Sent for review by publisher (Thank you guys!)
Publisher: Bloomsbury Australia
Format: Paperback ARC
Australian RRP: $16.99
Release Date: October 2016
Purchase: Bookworld | Booktopia | The Book Depository | Amazon
Final Thoughts: Though Stealing Snow was a struggle for me at times, I will possibly read the next novel to see how author Danielle Paige develops the series next.