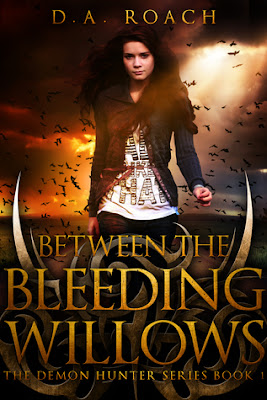 At eighteen years old, Cassidy has suffered more loss than most…

At the end of her senior year, her boyfriend, Jace Peters, was killed in a car accident, and her grandmother died only weeks later of a heart attack. Emotionally lost, Cassidy desperately searches for an heirloom her boyfriend was wearing in the crash—her mother’s gold ring. But during her search, Cassidy discovers more than her ring.

She finds a gate to the Demon Realm….

A battle is brewing, and Killian—head of the Demon hunters—preps his Clan for the approaching conflict. They’ve been working to secure the gate between his realm and the mortal world. But it’s been nearly impossible since Rya—a voracious demon on a quest to expand her power—devoured the soul of his Clan’s necromancer. Now Rya is possessed with the necromancer’s powers and she may break through the gate at any moment.

When Cassidy accidentally crosses into the Demon Realm, Killian can’t understand how a human girl survived the transition. Now he has to find a way to return her to her own world, or risk her being caught in the crossfire, which is a complication he definitely doesn’t need.

Once back in the Human Realm, Cassidy readies herself for battle. She signs up for Krav Maga classes, where she meets Tyler Romaitis—a handsome, tenacious, humble guy. He seems almost perfect, but nothing is ever that easy.

And as the balance between good and evil shifts, Cassidy finds herself—and her ring—at the heart of the conflict for the survival of mankind.

Between the Bleeding Willows by D.A. Roach is a fast paced and exciting start to a promising new paranormal series that easily left me raring for more!

Cassidy Cavannagh has experienced a lot of loss in her eighteen years. First her long-time boyfriend Jace was killed in a car accident and then her grandmother--the woman who raised her--her died of a heart attack a short time later. Heartbroken and lonely, everything changes for Cassidy when she follows the ghost of her lost love through a cemetery and finds herself then falling through a gateway to another world; a world of demonic creatures and demon hunters who are the only thing standing between hell on earth.

I really liked the great cast of characters D.A Roach has introduced in this novel, especially those of the Clan. Cassidy was a likable main character. Normal and easy to follow and someone with real potential. Killian was a brilliant love interest and male lead. I’m very much won over by him and those within his Clan. Reminiscent of The Mortal Instruments in some ways, these demon hunters are characters I’m really looking forward to getting to know. I loved their dynamic together.

The inclusion of the bond between Cass and Killian was fantastic and I’m really curious to discover if the draw they felt towards one another was because of the bond or irrespective of it. I love the potential of a strong relationship between them, but I felt considering she had recently lost her boyfriend, Cass’s response to Killian seemed a bit too fast. Don’t get me wrong—I’m totally hankering to see something develop, but I want to see a bigger build up and some more resolution to Cassidy’s love for Jace.

Having read this book via Netgalley, I’m not sure if it was the fact that I was reading an ARC, but my copy of Between the Bleeding Willows had a few grammar mistakes and sentence errors. I’m going to give the book the benefit of the doubt as it truly was exciting to read with excellent character chemistry, plenty of mystery and tones of potential.

Perfect for fans of The Mortal Instruments who can look past the similarities, Between the Bleeding Willows has kicked off a bright new series full of magic, adventure and even romance. I look forward to reading the next book!