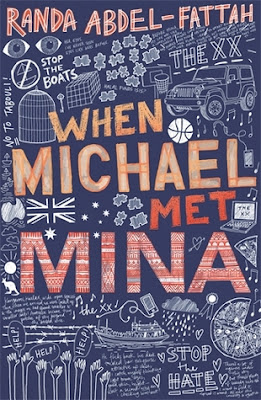 Before Mina, my life was like a completed jigsaw puzzle but Mina has pushed the puzzle onto the floor. I have to start all over again, figuring out where the pieces go.

When Michael meets Mina, they are at a rally for refugees - standing on opposite sides.

Mina fled Afghanistan with her mother via a refugee camp, a leaky boat and a detention centre.

When Mina wins a scholarship to Michael's private school, their lives crash together blindingly.

A novel for anyone who wants to fight for love, and against injustice.

When Michael Met Mina by Randa Abdel-Fattah is a wonderfully written and deeply thought provoking tale. Featuring a strong social and political message prominent in today’s Australian culture, When Michael Met Mina is an entrancing tale that is guaranteed to make you think…..

Michael's dad is the leader of a small but rising political group called Aussie Values who are vocal with their stance against asylum seekers. Mina and her mother are refugees who fled war torn Afghanistan by boat for a safer life in Australia and who have built a new life for themselves during their ten years in Australia. When a move for Mina’s schooling sees Michael and Mina meet, both quickly learn that they’re on opposite sides of the divide. Yet neither can deny there’s something about the other that makes their heart flutter and soon these two teens being to discover something stronger than hate…..love.

Told through the alternating POV’s of our two teenage protagonists, one on each side of the social and cultural divide, When Michel Met Mina explores the controversial topic of refugees and asylum seekers within Australian in a fun and fictional way that is brimming with honesty and hard truth.

I was really impressed with When Michael Met Mina. At the end of the day it is a work of fiction and Randa Abdel-Fattah does a fantastic job of making When Michael Met Mina highly entertaining, but still manages to focus on an important topic. I enjoyed seeing the typical drama that come with being a teenager (boys, friends, school) mixed amongst a story that explored such a heard hitting issue—hormones and issues of hate mingled to create a vivid, diverse and engaging read.

When Michael Met Mina is a really hard book to review without delving too much into the political aspect of the issue. My own personal beliefs are a mix of both Michael and Mina’s thoughts so in that respect Abdel-Fattah hit the nail on the head for me. Both Michael and Mina were wonderful characters to follows and wonderfully complimented each other.

Abdel-Fattah writes the perfect amount of culture and diversity into When Michael Met Mina and highlights the plight of the refugees whilst managing to convey the other side of the story. When Mina Met Michael is a really enjoyable YA contemporary read but it’s also a book that makes you think. A great combination.

My only issue with this book was the ending; I felt like it came too soon, and I still have so many questions. Perhaps it was because I had become so invested in Michael and Mina’s lives and their fight that I wasn’t ready to leave them. I still find myself wondering how Michael and Mina will handle the next step in their relationship and how his parents react to him dating a Muslim. How is Baba doing with the restaurant? Has Jane moved on from Terrence? How is Mina’s mum and Baba handling their little bundle of joy, Nabil?

Excellently written with tangible characters and an important message, When Michael Met Mina is wonderful work of Australian fiction and something I highly recommend!