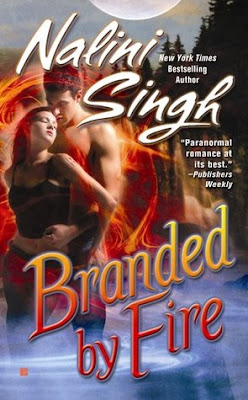 When a brilliant changeling researcher is kidnapped, DarkRiver sentinel Mercy, a cat, and SnowDancer lieutenant Riley, a wolf, must work together to track the young man-before his shadowy captors decide he's no longer useful.

Along the way, the two dominants may find that submitting to one another uncovers not just a deadly conspiracy, but a passion so raw that it'll leave them both branded by fire.

Branded by Fire is the sixth novel in Nalini Singh’s Psy-Changeling series and is an absolutely stunning read full of delectable sexual tension, simmering chemistry and plenty to action and adventure to keep me on my toes.

Regardless of her gender, DarkRiver sentential Mercy is one of the strongest fighters in her leopard pack. A respected solider and protector, Mercy secretly longs for a mate of her own with so many of her pack mates recently settling down, but the last thing she expects is for an arrogant and controlling wolf to make her burn. Calm and collected, SnowDancer lieutenant Riley is known for his protective nature and is ability to stay in control of his emotions even when he’s pushed. Having raised his two younger siblings after their parent’s death, Riley is well aware of the importance of staying in control, but no one knows how to push his buttons like Mercy. Drawn to each other despite being from two different packs, Mercy and Riley are both dominant changelings about to discover that submitting to each other may not always be the hardship it seems, even as they fight to keep hold of who they both are…..

Wow! What another great novel! Branded by Fire features two strong and dominate personalities doing a back and forth dance as they explore the fire that burns between them, and boy does Nalini Singh write it well. From their very first coupling, I knew Mercy and Riley were going to be explosive together and was this ever the case! The chemistry between them was dynamite and oh so sensual. These two oozed sexual attraction and possibility even as they navigated the difficulty of coming from two opposing packs and both being dominate individuals.

Told through both their POV’s like all the other novels so far, Mercy and Riley were brilliant to follow. Honestly, I just loved both of them. They were strong, personable individuals who were intelligent, quick thinking and daring soldiers. I loved Mercy’s cheeky nature and the cat in her, while Riley was determined and protective about those he cared for. They complimented each other well, and though they were so similar managed to bring something different to the relationship—Mercy with her ability to bring Riley out of his shell, and Riley with his ability to accept Mercy for who she was and not try and change her.

The different dynamics between the two packs was really exciting to explore in Branded by Fire. Something I’ve really enjoyed about this series so far is that you have human’s, Psy and Changelings, but the series focuses around two different packs of shifters, one leopard and one wolf, with DarkRiver and SnowDancer’s featuring different hierarchies and alphas. The greedy part of me simply likes having double the amount of characters to follow and explore, but the logical side can see the benefits Nalini Singh takes advantage of by having the two different packs. Their interactions with each other and the layers they bring to the series are wonderful—the wolves and leopards are very similar and yet very different, but boy are they all so brilliant to read about!

Nalini Singh continues to include past couples and characters we’ve met which satisfies the part of me intrigued to see how their lives are going. There’s an adorable development to Sascha and Lucas’s life that promises to bring so much joy, and Singh introduces more fantastic characters I’m keen to get to know. I have my fingers crossed that maybe one, or all, of Mercy’s brothers may get their own story down the line. I’m particularly hopeful for Bas who alright ignites my fire!

Sensual, smoking and absolutely perfect, Branded by Fire is another great tale that does not disappoint! Nalini Singh you are a genius!