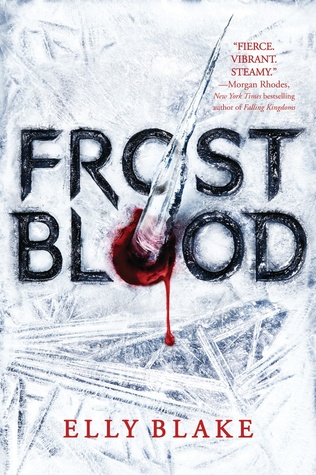 Frostblood by Elly Blake
Releases on: January 17th 2017
Add on Goodreads!
Seventeen-year-old Ruby is a fireblood who must hide her powers of heat and flame from the cruel frostblood ruling class that wants to destroy all that are left of her kind. So when her mother is killed for protecting her and rebel frostbloods demand her help to kill their rampaging king, she agrees. But Ruby's powers are unpredictable, and she's not sure she's willing to let the rebels and an infuriating (yet irresistible) young man called Arcus use her as their weapon. All she wants is revenge, but before they can take action, Ruby is captured and forced to take part in the king's tournaments that pit fireblood prisoners against frostblood champions. Now she has only one chance to destroy the maniacal ruler who has taken everything from her and from the icy young man she has come to love.

Fast-paced and compelling, Frostblood is the first in a page-turning new young adult three-book series about a world where flame and ice are mortal enemies—but together create a power that could change everything.

Thoughts:
I quite like the sound of Elly Blake's debut novel Frostblood. This novel sounds like something right up my alley. I mean any kind of fantasy where the heroine encounters "an infuriating (yet irresistible) young man" has my ultimate attention. Just appeals to the romantic in me. And it doesn't hurt that the rest of the description sounds pretty good too.


Do you like the sound of an Frostblood?
And what are YOU waiting on this Wednesday?