Book Shelf: One Last Kiss (It's in His Kiss) by Ally Broadfield 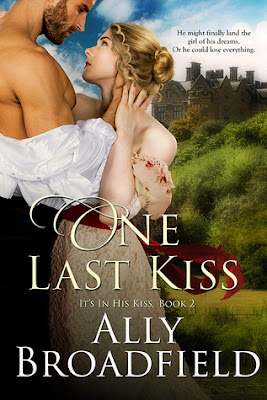 Captain Mikhail Abromovich would rather single-handedly face the entire French army than follow orders to deceive Anna, the woman of his heart, by feigning a courtship to hide his covert activities.

Ever since a gossip sheet revealed the details of her extensive dowry, Princess Anna Tarasova has been overrun by fortune-hunting lords. When her childhood sweetheart mysteriously appears in London and asks to court her, it seems too good to be true.

For Mikhail, who is both soldier and spy, being chosen to represent Russia in secret negotiations with Britain should be the assignment of a lifetime. But once his deception is revealed, he’s certain Anna won’t believe his love is real.

One Last Kiss is the second novel in Ally Broadfield’s It’s In His Kiss series and is a deeply enjoyable historical romance featuring a wonderful love story, plenty of chemistry and delectable characters.

Set in London in 1812, One Last Kiss introduces readers to Princess Anna Tarasova and Captain Mikhail Abromovich and detailing their vivid romance. The cousin of the Russian Tsar, Princess Anna Tarasova has been living in England with some relatives as the possibility of France invading Russia escalates every day. Thanks to her heritage and her family’s wealth, Anna is a highly eligible marriage prospect, something that brings suitor after suitor to try and win her heart. Yet, Anna has only ever loved one man; the childhood friend she still yeans for; the childhood friend who has just reappeared in her life….

Captain Mikhail Abromovich has been sent to England to secure an alliance between Britain and Russia on a mission that must remain the securest of secrets. In order to keep up appearances, Misha must court Anna. Considering he has been in love with her for years, spending time with Anna is no hardship but when his deceptions are revealed will Misha loose the woman who owns his heart?

I’ve never been the biggest historical romance fan, but when Ally Broadfield is involved all bets are off! There hasn’t been a novel of hers that I haven’t whole heartedly adored and One Last Kiss is no exception! Well written and paced, One Last Kiss unfolds through the eyes of both main characters and details a really lovely romance. Broadfield depicts a vivid and richly historical 1800’s England that feels authentic and easily draws you back in time to opulent parties and lush balls.

I enjoyed following Anna and Misha as characters. Anna was poised and sweet and very kind but also had spunk. She was the type of girl you couldn’t help but like and Mischa was definitely a swoon worthy Russian solider. I loved that he had built himself up for her and that he never stopped caring about her.

Anna and Misha’s romance was very endearing and so very sweet. Set in the 1812 as the novel is, I appreciated the sexual tension and fire Ally Broadfield wrote into their relationship and love that they were childhood friends. It added an extra layer and added depth to their romance.

One Last Kiss is filled with fantastic characters and I loved being able to see Charlotte and Sebastian again. They’re as fabulous as ever and still so perfect together. I’m really excited to see who Ally Broadfield focuses on next; personally I really liked Anna’s sister Natalya and Charlotte’s cousin Amelia—they’d make fantastic leading ladies. I’m also intrigued by Lord Ashton; he was charming and kind and I wonder if maybe he might get a HEA down the track too!

Charming and endearing, One Last Kiss is a delectable historical read and I’m thoroughly looking forward to reading whatever Ally Broadfield releases next!