I'm excited to welcome author L.A. Weatherly to the blog today to talk about her latest release Broken Sky which hit bookstores on March 1st. 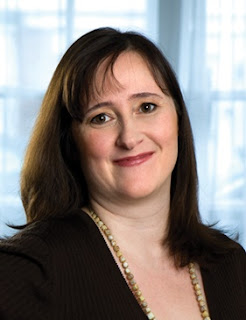 You’ve previously found success with your Angel trilogy, but Broken Sky marks a whole new project for you. How does it feel for you beginning something new after Angel?
Very exciting! I've actually been writing this series for a while now, so apart from my editors and a few friends who've read it, I've been on my own with this world. So I’m really looking forward to finally seeing what readers think of it!

Broken Sky is set in a distorted 1940’s America and sounds really different. What can readers (like myself!) who are looking to jump into the book expect to find within the story?
An adrenalin-fuelled story with teenage fighter pilots, corruption, betrayal and a cool 1940s vibe. (Oh, and maybe some romance!)

Where did the idea of Broken Sky actually come from? The idea of a perfect world sounds pretty, well….perfect. How much work went into creating your world?
I genuinely don’t know; the concept literally just popped into my head one evening when my husband and I were having dinner. I have the writing fairy to thank for this one, I guess! The ‘perfect world’ bit is just propaganda put out by a particular leader, though – none of the characters think their world is perfect, though they do think they live in a society that’s successfully eradicated war.

Lots of work went into creating the world of Broken Sky, which has a historical feel but is actually set in the far future. My editors were amazing; they helped me spot any inconsistencies (of which there were legion!).

Can you describe your Broken Sky heroine Amity in one sentence?
Amity is a gutsy, idealistic young fighter pilot who blurts out whatever she’s thinking, is afraid to get close to others for fear of losing them, and is a bit too trusting of the organisation she serves.

What do you think would happen if Amity and Willow [From the Angel trilogy] ever met?
Oh, I love this question; it’s made my mind bend a little. Wow. They are SO different. I think if they had to work together to solve a problem, they’d make a phenomenal team. But if they just encountered each other at a party, they might struggle a little. Amity doesn’t do small talk very well, and Willow’s not into any of the things that interest Amity. If they could get beyond that, though, I think they’d really like and respect each other.

Growing up did you always know you wanted to write?
Yes, always. One of my earliest memories is writing and illustrating a story when I was around five or six. I was very determined to get it published. (Alas, to have one’s hopes crushed at such a young age..!)

Who has been your biggest inspiration throughout your life?
No one particular person, really. I always find biographies of other writers or people in the arts inspiring. It’s comforting to realise that we’re all mad as snakes, and it’s not just me!

If you would meet anyone, living or dead, real or fictional, who would you want to meet and why?
I’m going to be very boring and say my parents. My mother passed away five years ago, and my father when I was twenty. Seeing them both again would be incredible. My father died before I was published, so I’d especially like to show him some of my work. I think he’d be really proud.

Even though Broken Sky is yet to hit stores, what can readers expect from the rest of the trilogy? Are you going to keep us on our toes?
I certainly hope so! Book 2 in particular goes to some very dark and perhaps unexpected places, and then book 3 has some tricks up its sleeve as well. (Checks inside book 3’s sleeve. Yep!)

Thanks again for taking the time to chat with me today. I have previously read and loved Angel, and I’m looking forward to reading Broken Sky—it sounds seriously good!
Thanks so much for the great questions! I hope you enjoy Broken Sky when you read it, too.

Note: I want to point out that since sending these questions to Lee, I have actually read Broken Sky and very much enjoyed it. I've heard mixed things about it, which surprised me, but I personally found Broken Sky to be really intriguing and unexpected, especially at the end.

Lee Weatherly was born in 1967 and grew up in Little Rock, Arkansas, USA. She lives with her husband in Hampshire, England, where she writes, goes on walks, tries out new recipes and has a cat named Bernard.

L.A. Weatherly is the pseudonym for Lee Weatherly. 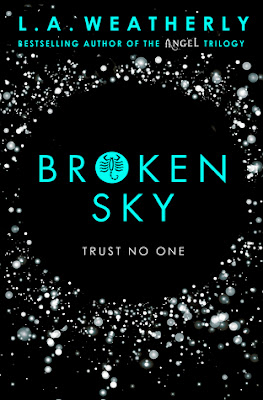 Welcome to a ‘perfect’ world.

Where war is illegal, where harmony rules.

And where your date of birth marks your destiny.

But nothing is perfect.

And in a world this broken, who can Amity trust?

From the bestselling author of the Angel trilogy comes Broken Sky – an exhilarating epic set in a daring and distorted echo of 1940s America and first in a new trilogy.

Congrats to L.A. Weatherly on the recent release. Published by Harper Collins, Broken Sky is available now online and in all good bookstores. Be sure to grab your copy!

Email ThisBlogThis!Share to TwitterShare to FacebookShare to Pinterest
Labels: Interview