Book Shelf: Love Me, Love Me Not by Alyxandra Harvey 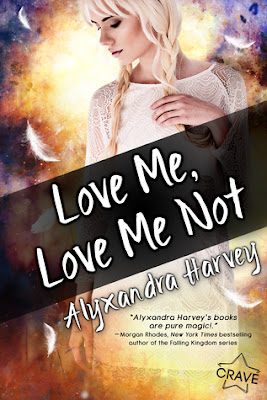 Dating isn’t easy when you’re in the middle of a blood feud.

Anastasia Vila’s family can turn into swans, but just once she’d like them to turn into responsible adults.

After hundreds of years, they still cling to the blood feud with the Renard family. No one remembers how it started in the first place—but foxes and swans just don’t get along.

Vilas can only transform into their swan shape after they have fallen in love for the first time, but between balancing schoolwork, family obligations, and the escalating blood feud, Ana’s got no time for love. The only thing keeping her sane is her best friend, Pierce Kent.

But when Pierce kisses Ana, everything changes.

Is what Pierce feels for her real, or a byproduct of her magic? Can she risk everything for her best friend? And when the family feud spirals out of control, Ana must stop the fight before it takes away everything she loves.

Love Me, Love Me Not is a magical and whimsical tale that sees Alyxandra Harvey once more draw fans into a luscious and romantic tale mingling romance, magic and excitement!

Having previously read all of Alyxandra Harvey’s published work, I was excited to dive into Love Me, Love Me Not and once again, Harvey did not disappoint! I found Love Me, Love Me Not was a well told and well-paced novel that deftly wove magic, romance and danger together and introduced readers to some thrilling new mythology. The concept of "swan girls" was very different and unlike a lot of shape-shifting type tales, Love Me, Love Me Not really did explore something I hadn’t seen before.

Love Me, Love Me Not is told through the varying POV’s of Anastasia "Ana" Vila and Peirce Kent. Ana is from a long line of women who are able to turn into swans and who has been patiently waiting for the moment she would fall in love and receive her swan form. Pierce on the other hand is Ana’s literature loving best friend who has been secretly pining for Ana for years and who is the only person outside Ana’s family who know about swan maidens. Ana only seems to think of Peirce as a friend but as that slowly changes and as the blood feud between Ana’s family and their enemies escalate, soon Ana finds herself in danger of not only losing her heart, but her life…..

Personally I really enjoyed Love Me, Love Me Not and found it to be a very enjoyable, easy read. Harvey has clearly thought about her mythology well and I liked these strong and fiery swan maidens. The dynamic between the Vila family members was really nice and I liked their devotion to one another. If I’m being picky, I did notice some similarities in the family dynamic between the Vila’s and the Drake family from Alyxandra Harvey’s Drake Chronicles—but these were only minor similarities; nothing that would make or break the novel for me.

As far as I’m aware, Love Me, Love Me Not is a standalone novel, but I’d really love the chance to explore some of the other characters, including the Renard’s. Ana’s cousins Sonnet, Rosalita & Mei Lin hold promise, as does Liv Renard, a "fox" girl. It would be nice to see Harvey flesh the series out a little bit more, but I’m only speculating (and hoping) here.

Nicely paced, magical and romantic, Love Me, Love Me Not features two likable main characters and I romance that develops well over time. A decent read worth your time!

Source: Sent for review by Entangled Publishing (Thanks guys!)
Format: Kindle ebook via Netgalley
Buy it:  The Book Depository | Amazon | Barnes & Noble | Kobo
My Recommendation: If you enjoy magic and the paranormal this is for you!
Cover: This cover is very pretty.
Will I read sequel/continue with series: This is a standalone novel, but I'll read whatever Alyxandra Harvey publishes next!